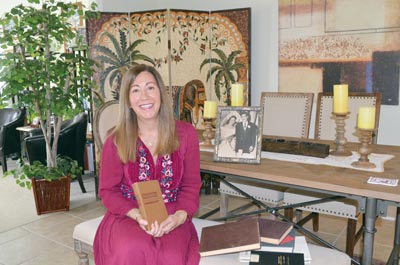 Donna Habib of Farragut recently completed a book about the marriage between her mother, Knoxvillian Betty Jean Clark, and her father, Saeed El Gazzawi, of Jordan. She wrote the book using her mother’s own hand-written journals, some of which also are pictured.
Betty Jean Clark El Gazzawi recorded her life through nearly a dozen hardbound diaries, intending one day to write a book about her experiences as a Jordanian bride in the 1950s.

Unable to live to complete that task, Betty relied on her daughters to carry out her wishes — and one, Farragut resident Donna J. Habib, published her mother’s heart-felt story earlier this year.

The book, “Baba’s Southern Magnolia,” took its title from one of many sweet nicknames Habib’s father, Saeed, bestowed on young Betty, the Knoxville woman he met and married as a visiting University of Tennessee student in 1951.

Habib captured the tone of their sweet love story not only through her mother’s journals but also through seeing her parents relationship as it was throughout her childhood.

The couple’s love for each other transcended all boundaries of religion and culture, and on the surface, they could not have seemed more different.

Saeed, the first-born son to the leader of Jordan’s largest Bedoin tribe, was a Muslim and was extensively educated outside the country in order to eventually lead the tribe himself.

“He had gone to (undergraduate) school in Lebanon and was looking for a good agricultural school” in the United States, Habib recalled. “California and Tennessee both had good schools, so he flipped a coin, and here we are.”

Betty had grown up in South Knoxville and graduated from Young High School. She came from a large and loving family, who encouraged her education, and a mother who brought her up in the Church of Christ faith.

When the couple met at a UT dance in 1951, Betty had a date, but the two noticed each other right away. Finally, he gathered his courage and asked Betty’s escort if he could dance with her. The escort, of course, refused, but Saeed persisted, asking to hear the words from Betty herself. She would not turn him down, and from that night the two immediately began a courtship which, according to the book, was very well received by most of Betty’s family.

The two fell in love and married in Knoxville in Betty’s home church, even though by that time, Saeed’s father had written him that he would be disowned if he went through with the marriage.

The newlyweds forged ahead with plans for Betty to also attend UT after Saeed’s eventual graduation. Time and circumstances, however, brought about a reconciliation between Saeed and his father, and he and Betty moved to Jordan after he graduated, where they lived the rest of their married lives.

“She won them over with her sweetness, and they loved her for it,” Habib said.

It was not an easy time for Betty, who had to adjust not only to new people, cultures, climates and food, but also to the fact she was halfway around the world from the only life she had ever known.

Habib said she believes her mother kept so many journals because “she was lonely and didn’t really have anyone to talk to when they first moved to Jordan.

“There were a lot of tears those first three years in Jordan. She was pregnant with my sister, Suzi, when they first arrived. There were a lot of emotions for her. My father was very busy, and he was her only outlet to speak her language.”

Betty eventually came into her own, learning the language and customs while also remaining the girl with whom Saeed had fallen in love. He encouraged her to continue in her faith and did not try to change her ways of dress or even discourage her from smoking, as most women did not do publicly in Jordan at that time.

“He loved my mother for who she was and did not try to change her. That is what true love is,” their daughter said.

After a lengthy illness, Betty died in 1974, but not before ensuring the couple’s four children would attend UT to attain the education she was unable to achieve for herself.

“My father wanted her to go [to college], but she would not stay [in Knoxville] without him.”

Habib was only able to bring herself to read the journals about 10 years ago, and it still proved to be a daunting task.

“It was hard and took about three years (to read them all),” she said, adding the emotional aspect sometimes is still overwhelming to her.

“But I could feel the girl she was at 24, who was from Knoxville but had gone to the Jordan Valley so far away.”

Habib said it was important to her to tell her mother’s story, showing how even though Betty left Knoxville more than 65 years ago to travel halfway around the world, her children brought the trip full circle.

“She affected who we are and where we are,” Habib said. “We all came to UT, and my brothers married two women from Knoxville.”

Habib married and lived in Cairo, Egypt, for 22 years before moving back to Knoxville herself, and said her sister, Suzi — their last remaining family member in Jordan — has plans to move to Knoxville, too, after settling family property.