Ringing in New Year at BrickHouse 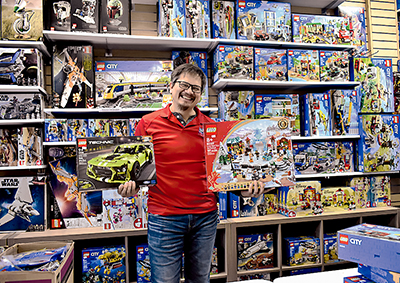 While typical New Year’s Eve revelers waited with noisemakers and glasses of champagne to ring in the new year, dozens of Lego fans patiently waited outside BrickHouse Collectibles in West End Center to start 2022 with new projects in hand.

“Lego has two huge release dates every year — Jan. 1 and Aug. 1 — not sure about why those specific dates, but we thought we would open at midnight New Year’s Eve to offer the new sets,” BrickHouse Collectibles owner Pat Burnett explained about the special open house held from midnight to 2 a.m., Saturday, Jan. 1.

He had flooded social media with previews of specific sets in the days leading up to the event, showcasing new offerings from the Ninjago, City, Minecraft, Disney and Star Wars lines, as well as a Creator line model Shelby and brand-new Chinese New Year sets — but was still surprised at the number of Lego enthusiasts who flooded the store.

“We had about 60 transactions, and well over 100 people came,” Burnett said. “It was awesome. Our New Year’s Day was off the charts. 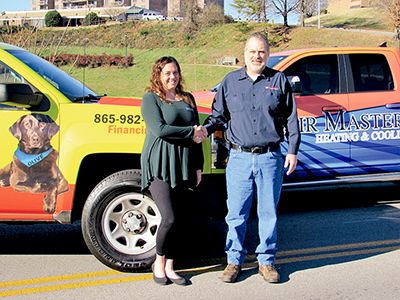 While Russell & Abbott marked its 44th anniversary in 2021, Air Masters was foundered in 2003 by owners Brian and Alisa Baker.

“My wife and I are retiring due to health issues,” said Brian Baker, whose company provided residential heating and air conditioning services primarily in Blount, Knox and Loudon counties. “I wanted to be sure my heating and air customers continue to be well taken care of.

“We have worked hard to build a special relationship with our customers, so it was important to us to ensure they will be in good hands,” he added. “The Russell & Abbott team members are experienced professionals, and they stand behind their service. My customers can trust and rely on them to do the right thing.”

As the Bakers had worked out of their home, “we just moved all the operations into our business and merged the two together,” Russell & Abbott CEO Chris Hurley said. “We are looking at expansion possibilities of where we may go and what we may do.

Chov is an East Tennessee native with roots in Chattanooga. She moved to Knoxville to attend the University of Tennessee in 1999.

Since then, she has been a part of Knoxville’s environmental community through work with Knoxville-Knox County Community Action Committee, AmeriCorps, CAC Beardsley Community Farm and University of Tennessee.

She is an AmeriCorps alumnus, serving with Knox County Schools between 2004 and 2006 with recycling, composting, school gardens and water quality initiatives.

She is most known her for her accomplishments at CAC Beardsley Community Farm, where she served as farm manager and eventually its director of urban agriculture. Her work at CAC Beardsley Community Farm allowed her to form dozens of partnerships focusing on food security and sustainable agriculture. There, she wore many hats as the organization blossomed over the years. She has a wealth of experiences with volunteer management, education programs, event planning, grant writing and fundraising.

• Powell Auction & Realty, LLC., recently named Phillip Hopper as executive vice president of real estate. In this role, he will lead the full spectrum of the company’s work in real estate, including commercial and residential properties and land.