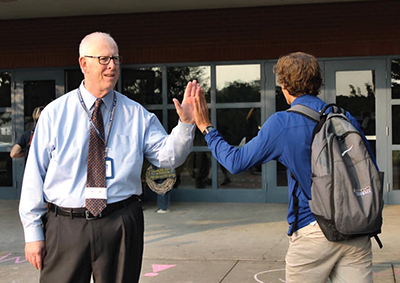 Dan Perryman, who had been leading CAK in an interim capacity since July 2018, became ill Christmas Day and remained hospitalized until he passed away Tuesday, Dec. 31.

“We are all heartbroken,” said Julya Johnson, director of Communications for CAK. “Mr. Perryman was one of the most Godly men I have ever met, and he encouraged all of us to trust Jesus this year, as the Lord is our everlasting rock (Isaiah 26: 3-4),” she posted on the school’s Facebook page in announcing his death. “We must remember that and carry on with his amazing legacy.”

Mr. Perryman, who had more than 40 years of private school experience in teaching, coaching and administrative capacities, began working at CAK in 2008 when he was hired by then high school principal Don Snider, who now serves as head of school at Concord Christian School.

“I hired him twice,” Snider said, noting Mr. Perryman left for a brief time to work as a head of school in Colorado before returning to CAK in 2012. “He truly was a jack of all trades — he had done it all. He taught every grade level and was just a great guy.”

“There were a lot of things that struck you about him,” said Snider, who in the last three years also counted Mr. Perryman and his wife, Donna, as neighbors. “He was 6-foot 3, but was truly a gentle giant, and a humble, Godly man. He was also a man of his word and a hard worker.”

“Whenever you mentioned his name, whether it was a parent or a student or a teacher, they would say, ‘Who doesn’t love Mr. Perryman?’” she said. “He was just the best. To every kid, from the smart ones, to the athletes, to the ones who some might say could be difficult, he related to them all.

“It was never a job to him,” Marcy added. “He truly loved what he did.”

In addition to his wife, Donna, to whom he was married 42 years and would have marked 50 years since they began dating this June, Mr. Perryman also leaves behind the couple’s son, Darrin, daughter-in-law, Sheila, and grandchildren, Jackson and Bryson.

A celebration of life service was held for Mr. Perryman Sunday,

Jan. 5, in First Baptist Concord, with Snider delivering one of three eulogies. The family asked that in lieu of flowers, donations be made to CAK “in order to further the spiritual growth and discipleship of students there,” according to the memorial service information released.

Donations may be made by visiting www.cakwarriors.com/support. Anyone wishing to send cards or letters to the family may do so addressed to CAK, ATTN: Perryman Family, 529 Academy Way. Knoxville, TN, 37923.

Rich Fulford, who at the time of Mr. Perryman’s death was assistant head of school and middle school principal, also was head-of school-elect, and was to have assumed the reins July 1.

Under the circumstances, however, Fulford said he was officially named head of school earlier in the day by CAK’s governing board.

“It’s hard and a tragic situation with the loss of Dan,” said Fulford, who also spoke at the memorial service. “If there is anything positive to come out of it, it is in the fact we will have stability in the transition.

“He was a good man and a Godly man, but most of all he

was selfless, and he was my friend. I worked closely with him for a year-and-a-half and was

with him when he started every day in his office, poring over his well-worn Bible,” Fulford added. “He showed me that is how I need to lead, to be in God’s word first, and he showed me how to have Godly poise and grace.

“He helped me grow into a better man, and I will miss him.”