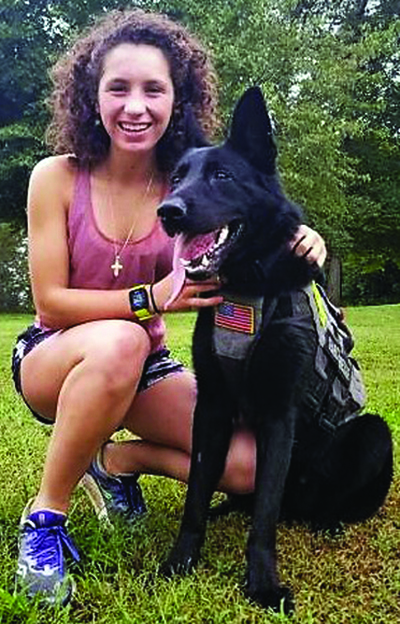 Eleni Christopoulos, 16, a Farragut resident and junior at Knoxville Catholic High School, with Kato, the black German shepherd she is helping to train to find missing persons.
Saying “hide-and-go-seek” was her favorite game “when I was little,” Eleni Christopoulos of Farragut has gotten to play it on most Saturdays lately — to help her new friend, Kato.

In fact, this 16-year-old high school junior is a natural fit on many levels as a volunteer who intentionally “gets lost” to help train Kato, a black

German shepherd, to find missing persons under the direction of Calibrated K9 and owner Ben Landkammer.

As a cross country and track student-athlete at Knoxville Catholic High School, “being active all the time has helped just with my endurance, being able to do longer runaways,” Christopoulos said about planting herself as a missing person at a

For all the “hide-and-seek” fun, however, a recent tragic reminder underlines the serious nature of this training to get Kato ready for work with Background Search & Rescue Team.

“I thought it might be good to provide this information regarding the public education programs, in light of the recent tragic death of the mother who died in the Smoky Mountains” in October, Christopoulos said.

Started in late spring. “I at least do once a week on Saturdays … for two to four hours, depending on how far I run,” she said.

In some shorter situations, “I’ll sprint away about 200 meters” before hiding. “There are also longer ones where Ben will keep Kato crated up in the car and I will go run through the woods like for a-mile-and-a-half, two miles, two-and-a-half miles,” Christopoulos said.

“There’s an app that tracks my route, and he’ll take Kato on the trail somewhere and he’ll sniff out my path, and on the app they can see where my path was, where I ran, and then where Kato’s was when he was finding me,” she added.

About Kato’s progress through early November, “He has improved so much,” Christopoulos said. “Just like (humans) in a sport, just getting reps in has really helped. He’s finding me a lot faster.

“It’s really exciting to see the improvement with Kato, because he started out not really confident — and now he’s confident,” she added.

“… I love the whole process of seeing Kato grow.”

About the specific progress of Kato toward completion of his training, “I’m not sure when he will be fully certified,” Christopoulos said.

Training locations have mostly been in Oak Ridge in addition to a “few in Knox (County) like over in Farragut,” Christopoulos said. “We will go to a dog park to get more of an urban setting, or like any wooded areas.

… We’ll go to different locations in the same day.”

As for how her role with Kato’s training started, “My mom (Xrisanthe Christopoulos), she was at the farmer’s market and she saw Ben and Kato. They had a little booth set up for information,” Christopoulos said.

“And he started talking to her about how they needed volunteers to go get lost in the woods as runners.

“And she told Ben I would love to do it because of my personality and I love being outside,” she added. “And so I got his business card and I contacted him.

“And then I started going about every weekend to go help out with Kato.”

The bottom line: “I love it, so hopefully I can stick with it until I go off to college,” Christopoulos said.