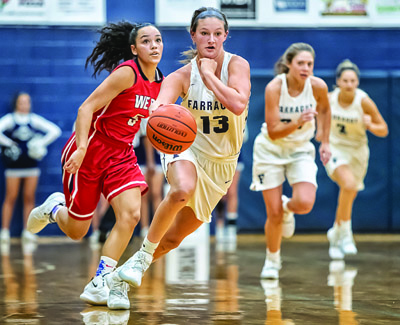 However, “I thought we showed heart, we showed resilience coming back,” Higgins added.

“We’re a young team, an inexperienced team, and we’re learning each and every day.”

“For a stretch there in the third quarter I thought we executed pretty well offensively,” Higgins said. “That’s been our biggest hitch so far this season is our execution offensively.

“We’ve just got to learn, as the game gets tighter we’ve got to play smarter and make smarter decisions,” he added.

“It’s like we dig out of a hole, but then we’re right back in it a couple of possessions later,” said Will Brown, senior guard/forward who led Farragut in scoring with 13 points. Junior post Alec Keathley scored 11, junior point guard Robby Geron added 10 points and freshman guard Dillon Atwell ended with eight.

In Farragut’s 43-36 district win at Lenoir City Tuesday, Nov. 27, “Our defensive effort in that game was great,” Higgins said.

“I thought Will Brown the last couple of games has been pretty good as far as being aggressive offensively — and rebounding, he’s done an excellent job.”