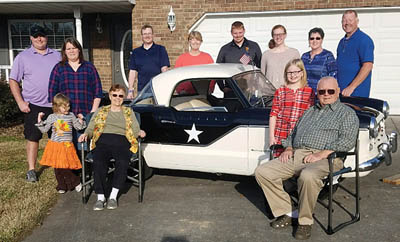 The Coburns, seated, have a large family that includes, in no particular order, daughter, Sherilyn Dawson; son and daughter-in-law, Steven and Keri Coburn; grandchildren, Kyle Coburn and his wife, Hollie, and their two children, Makenzie and Rylie; Daniel Coburn; David Dawson; and Elizabeth Dawson.
Not many married couples maintain the affection and love beginning during courtship, but Damon and Mary Coburn aren’t just any couple.

The pair, who celebrated their 60th wedding anniversary Thursday, Dec. 6, maintain a jocularity and devotion that goes far beyond simply being married.

They have shared a lifetime of adventure and excitement, from a love of the outdoors to a passion for antique vehicles, three of which they still have.

Farragut residents for the last four years, the Coburns met on a blind date in Mary’s home state of Michigan, where Damon had gone to work following his Army service in Korea above the 38th Parallel.

“A girl I worked with said her husband’s friend was coming to town, and would I want to go out?” Mary said. “I had just broken up with a boyfriend, so I said, ‘Sure.’

“We were going to go dancing, but the couple we were going with went out of town at the last minute, and I told (Damon) I would only go out with him if we went to the movies, but not dancing,” she added.

“I had heard about those southern guys.

“We got along great. And, if it hadn’t been for that first date, we might not have gone out again,” as she went on to explain they did have a double date with the couple who introduced them, “but it was a bombout.”

Despite that mishap, “We started dating,” Mary said. “He came every weekend to see me.”

“He had to come north to get a good wife,” Mary said with smile.

After their marriage, Damon’s job took the couple to Springfield, Vermont, and Boston, then back to Michigan before moving to Tennessee.

“I didn’t mind relocating to Tennessee,” said Mary, who was born and raised in Michigan.

“And, she got me in the deal,” Damon said with a chuckle.

They had a farm in Paris, in West Tennessee near Kentucky Lake, where the couple began an antique vehicle hobby that brought many classic tractors and cars into their lives. While they sold most of them when they moved, they held onto two 1958 Nash Metropolitans — one a hardtop, one a convertable — and an MG Midget.

Damon was quick with a “heck, yes” when asked if they still drive the antiques.

The Coburns have enjoyed camping, traveling, fishing, boating, motorcycle riding and dancing down through the years.

“We used to go Country-Western dancing every weekend,” Mary said.

“I could really shake a leg,” Damon said.

It was a pastime they were able to continue until about two years ago, when Damon fell into ill health. “We’ve had a very good 60 years, and until two years ago we both had good health,” Mary said.

It was their daughter who encouraged them to move to Farragut to be closer to her and allow her to help them if needed. It was a move that seemed meant to be, as Dawson was able to find a home in her neighborhood.

The Coburns not only are close to their daughter, who teaches at Concord Christian School, but also their son, Steven, and their daughter-in-law, Keri, who live in Cookeville. They also are thrilled with their four grandchildren and two great-grandchildren.

“We are very proud of our children,” Mary said. “They are very supportive of each other, and if we need anything they are right there for us.”

Dawson said she thinks the secret to her parents’ long and happy marriage is simple.

“Mom is the best cook you will ever meet,” she said. “And every morning she cooks him biscuits and gravy.”

“I have got to have my biscuits and gravy and bacon,” Damon said. “It gets me going.”

With the couple having both been ill recently, they had a low-key 60th anniversary day.

“Sherri surprised us with a shrimp dinner, and we watched home movies of our wedding,” Mary said. “She has taken really good care of us.”