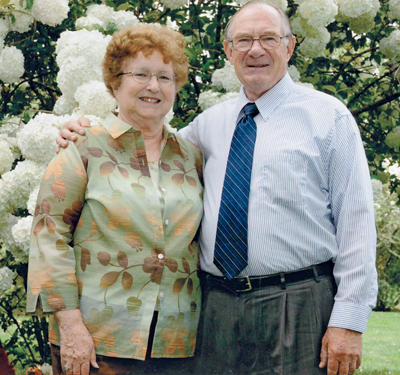 June Leuthold said her husband, Former Knox County Commissioner Frank Leuthold, is still a romantic after 61 years of marriage, and does not wait for a special occasion to bring her flowers.
For many couples, this week might be the high point of the year for romance, but for others it will be much more.

Farragut residents Duane and Mary Lea Cumpston will commemorate Valentine’s Day as the 72nd anniversary of the day they became engaged.

“I proposed and she accepted,” said Duane with a warm smile last week from their Autumn Care apartment.

The couple, both 93, remain loving and affectionate toward each other, even after nearly three quarters of a century together. On this overcast day, Duane had gone shopping, letting Mary Lea rest at home following some recent health issues from which she is recuperating.

Duane was a former World War II bomber pilot when they met in their native Iowa, and after they married May 18, 1947, they went on to have four children and live in Colorado and Florida before moving to Knox County 14 years ago.

Duane has a philosophy on marriage that seems to have served them both well.

“It starts with a romantic period for a while, then later on romance might fade and you get so busy … but if you are lucky, your relationship turns into a real good friendship,” he said. “We love living together, but we have kept our individuality too.”

Marriage is a commitment it “never occurred” to them to break, Duane said. “Divorces, I just don’t understand them, If you are attracted enough to get married, I don’t understand what happens after that, that it could cause divorce.”

The couple agree they “have never had any real major arguments.

“It doesn’t mean we always agreed on everything, and we didn’t give up on our own likes and dislikes.

“We have both loved our family, and loved our children.”

They also credit having a “good start” from their home church in Iowa, a foundation they have continued to find throughout the years, most recently at Concord United Methodist Church.

Fellow church and Sunday school class members Frank and June Leuthold likely will celebrate Valentine’s Day traditionally and “with flowers,” June said — but the gesture won’t be out of the ordinary.

The West Knoxville couple, who live near Farragut, isn’t far behind the Cumpstons in marriage longevity, as they have been married 61 years.

They met as college students at The Ohio State University, and Frank, a former Knox County Commissioner, said he knew pretty quickly “she was the one — I’m just not sure she knew.

They met during finals week, Frank said. “It was the (end of the) third quarter in 1955 at this (hangout) under the football stadium. We were playing (the card game) Ucher, and we had asked some girls to come down from a nearby dorm.”

“I sat next to one girl, took another girl home, and asked the third girl out on a date. But the fourth is the one sitting next to me now.”

He said June was the only one “who didn’t carry on any conversation,” and when she left that night, he didn’t even know her name.

“I didn’t want to have much to do with him,” June recalled with a laugh. “He was talking to the other girls, and I thought he was a big flirt, so I marked him off.”

“He called, and I was curious,” she said, adding that Frank turned out “to be different from the other guys I had gone out with — he had ambition, and no one else had that drive to succeed like he did.”

They married while still in college, but both went on to finish their degrees, with Frank later attaining a master’s and a PhD as he headed into an agricultural career that took him to Saskatchewan before being offered a

position at the University of

The couple moved to Knoxville in 1965. “It’s where we came, and where we stayed,” said Frank, who not only became involved in county politics down through the years, but also worked in college politics, church and various community affairs.

June also threw herself into volunteer work with the Red Cross and Farragut schools as their four children were growing up.

Frank said if there is a secret to such a long marriage, it includes “having a good time with each other.”

“We shared a lot,” said June. “We had a lot of common goals and interests, and have had a real respect for each other.