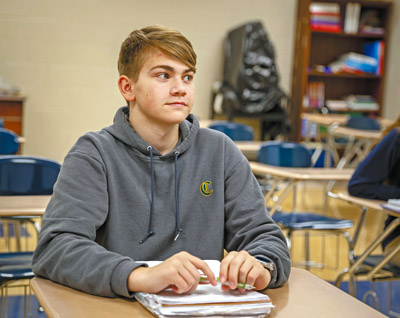 He had taken the PSAT — a preliminary to the college board SAT test — as both a freshman and a sophomore, but was set on improving his score.

“I studied this time and took a lot of practice tests online,” he said. “My friends were teasing me because they said ‘It doesn’t matter, it’s just the PSAT,’ but I still wanted to do well.”

The hard work more than paid off when Murr was recently notified he achieved a perfect score of 1520 on the test.

“I didn’t believe it at first,” he said. “I kept on refreshing it (the scores web page), because I thought there was no way, that it was wrong. But, finally, a couple of hours later, it really set in, and I still couldn’t believe it.

“I was very proud that my studying paid off.”

Murr said he finally told his parents, Andrew Murr and Lisa Rives, after he continued to hit “refresh” a few more times “to make sure, because it would be an embarrassing thing to take back.”

He also shared the news with his school counselor, Melinda Kirk, along with his friends.

“They were all happy for me,” Murr said.

She was quick to say she did not offer any assistance to Murr, noting he “was completely self-guided.”

Murr credited teachers Fletcher Williams, Dr. Kelly Kearse and Jack Rogers “for inspiring him,” and added Knoxville Catholic High School has “prepared me well and obviously got the job done.”

While, according to school officials, national statistics are not available regarding perfect PSAT scores, “Murr was one of the 1.6 million juniors who took the test, with only 1 percent of those students qualifying as a National Merit Semi-Finalists,” KCHS reported on social media.

“Of that 1 percent only a very select few will achieve a perfect score … Lincoln has earned his place in this elite group, and @knoxcatholic is so proud of Lincoln, in and out of the classroom.”

Murr enjoys science and math in school, and he plans to take computer programming his senior year at KCHS and a dual-enrollment computer applications class, with an eye toward his career goal in the computer science field.

“I hope to build applications that can help make a difference and that a lot of people use, and that will advance this field,” he said.

In addition to his own studies, Murr tutors, participates in the Model UN, is a club member of Mu Alpha Theta Math Club and will soon be inducted into the National Honor Society.

He also has been selected to attend the Governor’s School for Science and Engineering this summer.

Upon his college graduation, Murr said he hopes to work for a company in Silicon Valley, such as Google or Tesla or Microsoft — “something universal that everyone uses.”

Higher education schools certainly have taken note of his achievement. Murr said he has “been getting a lot of e-mails from big-time colleges, like Yale and Duke, Carnegie Mellon, which are fun to get.”

Murr is unsure if he will be taking the SAT, which is a bit more difficult, and has a possible high score of 1,600.

He already has taken the ACT college board test, and recorded high scores. He has taken it twice, achieving 32 the first time and 34 the second time out of a perfect 36 score.

Murr, naturally, plans to take it at least once more, striving to achieve perfection once again.

He does offer some advice for other students who are planning to take the ACT, SAT or PSAT in the months ahead.

“Do as many practice tests as possible and dedicate time to take a full test with no distractions. If you do mess up, don’t worry! There are still many test dates left, and each one helps you become more prepared for the next.”

He should know — it is advice which has certainly served him well.