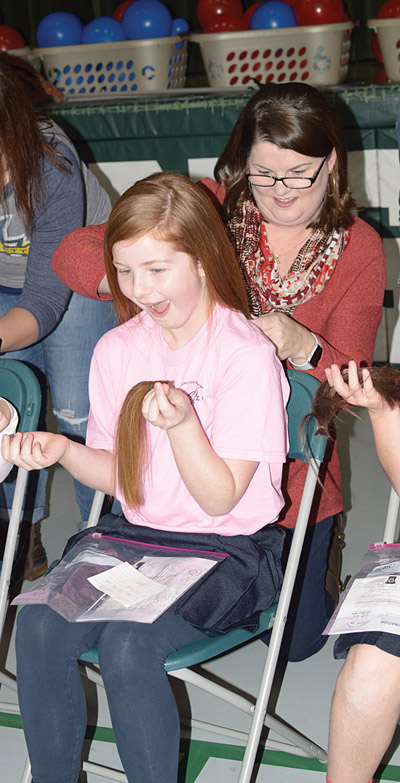 “I never dreamed I would be standing in front of the school with a bald head or ever needing a wig or understanding what people go through who have lost their hair,” said Dougherty, who was diagnosed with breast cancer Oct. 5, 2018, and has experienced the loss of her own hair from chemotherapy.

“So this has given me a unique perspective on truly what a gift these girls, moms and teachers have given.”

Hair from the ponytails are donated to the non-profit organization, Children with Hair Loss, to make wigs for children and young adults.

“Never in a million years did I think I would be able to tell you firsthand what it feels like to loose your hair,” she said. “I know St. John Neumann is such a supportive, caring community, but this is just a remarkable outpouring of love.”

Twenty-three girls and five women — one of whom was Dougherty’s sister, Marybeth Bergin of Alabama — sat in chairs to have their hair cut by a family member or friend.

While many donors said they gave their hair on behalf of Dougherty, others said they also knew someone else who had cancer or they simply wanted to help someone who needed a wig.

“I love my hair, but I want to help someone else,” said SJN student, Madeline Talley, who had 8 inches of hair cut.

“I am donating my hair because my hair can grow back. but others can’t grow their hair,” another student said. “It’s a small price to pay for putting a smile on someone’s face.”

“This is, by far, the largest crowd we’ve had to donate hair,” Dougherty said. “Over the past eight years, 188 teachers, students, parents and friends have given the gift of kindness to somebody they will never meet.”

The drive started as a way to observe Catholic Schools Week.

“Part of our mission is service to others,” she said. “So we were trying to figure out a service project that the students could participate in … this idea came to be. Girls have been growing out their hair and donating ever since,” Dougherty added.

In past years, she said the hair was donated through the Pantene Beautiful Lengths campaign, and wigs were distributed through American Cancer Society.

However, the Pantene campaign stopped accepting donations last December because it had enough hair to make wigs for the next four years.

“So we were trying to figure out what to do next,” she said.

With the help of SJN Leadership Council, Dougherty found Children with Hair Loss.

After the cuts, stylists from Belleza Salon volunteered their time to “fix up” recipients’ hair.

“When a child, anyone, who loses their hair to cancer treatments, alopecia or burns, the painful effects are a lot deeper than just cosmetic,” she said.

“My hair started to fall out the week before my second chemo treatment,” she recalled. “It was a little at first — no big deal — but by Black Friday, after Thanksgiving, it was coming out by the handfuls.”

While Doughtery prefers to wear a hat rather than a wig, she said, when she goes in for chemotherapy treatments, she does see women wear wigs.

“The wigs give people a sense of normalcy during times they feel anything but normal,” she said. “So, thank you, donors, past and present, for this gift,” Dougherty said then, with her voice breaking, “It’s truly a gift of love.”