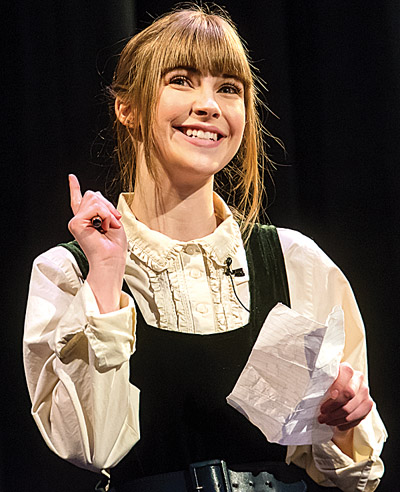 The junior swept three of the eight award divisions at this year’s regional Ace Awards in Bijou Theater, downtown Knoxville, Jan. 13. She topped her competitors in the categories of Shakespeare, portraying Phoebe from “As You Like It”; performing “Creep” by Radiohead during Open Singing; and singing and reenacting the opening number from “Carrie” in the Musical Theater category.

While “thrilled” with her own achievements, Bohan praised her fellow singers and performers.

“Everyone was really great,” she said. “It could have been any of us.”

Bohan “always” has been part of theater and vocal performing, most intensely since her middle school years.

“I love it,” she said of her long-standing passion. “I am just a different person on stage.”

At Farragut, she recently performed in the musical, “Godspell,” and will next direct “Where the Wild Things Are.”

“It is typically a senior who directs a show, and I am the first junior to do that,” she said. “It is cool to be on the opposite side.”

Bohan also is heavily involved with drama “forensics,” which involves single, duet and group competitions at regional and state levels.

During her freshman year, she finished first in the state in her interpretive category.

Bohan also has a unique appreciation for all kinds of music, thanks to her father, Ed Bohan, whose own eclectic tastes he has passed to his daughter. “I have always been into music … I’ve been to concerts my whole life, and we have a family collection (of different genres). So Heather had all that growing up,” he said.

Additionally, Heather counts her grandfather, who performed as part of a barbershop quartet, as an influence.

Ed Bohan describes Heather — the only child of he and wife, Helen — as “being an all around over-achiever.

“She is a straight-A student, in honors and AP classes,” he added.

She said she wants to study at a university or college that has a strong musical theater, but also realizes “it will probably not be a feasible career,” so is looking toward a different major, with a plan to minor in the field she so loves.

“She is too smart to be a starving artist,” her father said.

“I think I might like to do business, or entrepreneurialship,” she said. “I like fashion and crafts and have done the thrifting and embroidery things and sold it at market with my mom.”

Heather said perhaps her future could involve her starting a musical theater school.

“I would still want to do it on the side in some way,” she said. “Acting really is my passion. If every day it was my job, I would never get tired of it.”