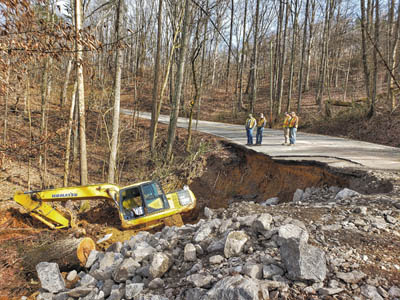 Motorists traveling from Watt Road onto Everett Road, just east of Yarnell Road, faced road closure signs following last weekend’s flash flooding damage. When a Knox County Public Works crew was trying to rebuild the pavement Monday, Feb. 25, their equipment got stuck because the ground “was so soft,” said Toby Dykes, KCPW supervisor. The road continues to be closed from Yarnell east past Oakley Downs subdivision. Dykes anticipates it will be open in about a week “if you’re lucky.”
Farragut experienced what some are calling its “100-year Flood” over the weekend, and crews will be working for some time assessing and repairing lingering damages.

More than 10 inches of rain was recorded in the Town during the week leading up to Saturday’s deluge — 5 inches Friday and Saturday, Feb. 22 and Feb. 23 alone — that flooded lakes and streams and shut down many roadways. Most notably were shutdowns on the Campbell Station Road intersection with I-40/75, but also included portions of Outlet Drive, Concord Road, Virtue Road, Everett Road, Newport Road, Woody Road and Loop Road.

Town officials and employees were very busy starting early Saturday, not only evaluating damage and closing roads, but also keeping the community in the communications loop via social media.

“Our staff worked tirelessly over the weekend during the flooding event, which resulted in the temporary closure of several roads throughout Farragut, to help keep motorists safe,” Town administrator David Smoak said Monday, Feb. 25. “The cleanup from this will be ongoing and I appreciate everyone’s patience as we make any necessary repairs that resulted from the tremendous amount of water that inundated our roads and stormwater system.”

According to Farragut Mayor Ron Williams, only one road in Town limits sustained damage resulting in its temporary closure — Maple Tree Drive off Fleenor Road, which is the back entrance to Sedgefield subdivision.

“The road caved in where a drainage culvert is located, and we will have to wait until the water stops (moving) so it can be properly evaluated as to how it will be repaired,” he said.

Fortunately, Sedgefield residents have an entrance that can be accessed off Watt Road, although Williams said some subdivisions with only one access road weren’t so fortunate Saturday.

The flooding brought to light two key issues according to the mayor.

“Subdivisions need to have two entrances and the Campbell Station (interchange) needs to be revamped,” Williams said.

Also impacting area residents is the continued closure of a portion of Everett Road, which Knox County is working to repair.

That roadway is so damaged county equipment became stuck Monday, Feb. 25, attempting to clear the debris and make repairs.

Knox County Commissioner John Schoonmaker said Tuesday, Feb. 26, that work will likely not be completed until sometime next week.

“At least weather is cooperating for a while, and we’ll get through this,” he added.

Schoonmaker also mentioned the eastbound Northshore Drive “drainage fill” shoulder work, which is planned from the roundabout intersection with Concord Road westward about a half-mile, was to set to start next week after having been delayed at least three weeks due to the recent rain and flooding (see story, page 2A).