Gage gets his day 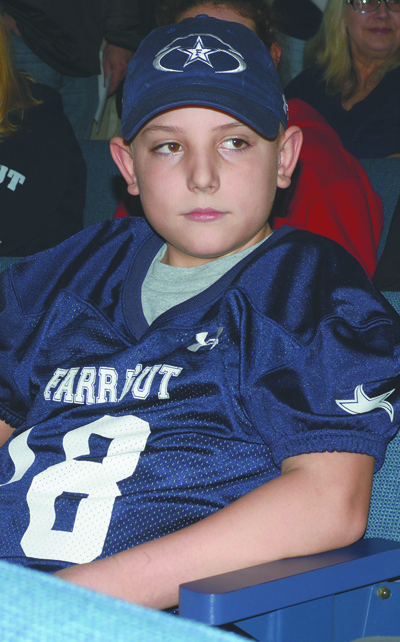 Gage Kirby
Family members and Farragut Youth Football players and coaches arrived in force at a Farragut Board of Mayor and Aldermen meeting Thursday, Feb. 28, to show their support for 11-year-old cancer victim Gage Kirby, as Feb. 28 and Nov. 1 were declared “Gage Kirby Days” by the Town.

“We are here to honor a special teammate, a special friend, a special member of our community,” Alderman Drew Burnette said.

According to the Town’s proclamation, Gage has been playing in the Farragut Youth Football organization since he was 5 years old.

A Hardin Valley Elementary School fifth-grader, he was diagnosed last fall with a rare form of brain cancer and underwent surgery to remove a tumor in November 2018.

“Gage played flawlessly against West two weeks after having his first brain tumor removed,” the proclamation stated. “Gage is a pillar of strength for those around him due to his positive ‘I’m going to beat this’ attitude.”

“It is my honor to honor you,” state Rep. Jason Zachary (R-District 14, which includes Farragut) said to Gage and the audience.

“To go what you’ve gone through and to look like you look and be ready for what comes next, I’m excited for what the future holds, and I can’t wait to see the difference and the impact you make in our community,” he also said to Gage during his address. “Look what you have already done and the people who are here to support you. Man, this is just the beginning.”

“Everybody’s got Gage stories,” Burnette said as he related a story of how, early in the school year, one of his sons, Moses, started playing for Farragut Youth Football and met Gage.

As No. 18, Gage was the Farragut 10-U team quarterback and captain last fall.

“I thought that spoke a lot for a new kid to come out on the team and for Gage to reach out and form a friendship early on. That meant a lot to me,” Burnette said.

“When your diagnosis came out, we were all pretty surprised, shocked,” the alderman said to Gage, but added, “Nothing surprises God. There is no surprise — nothing in the future, nothing in the past — He holds the present in his hands, and you can take comfort in that.”

Burnette quoted Jeremiah 29:11, referring to God’s plans “‘to prosper, not to harm, and plans for hope and a future.’

“That doesn’t always mean it’s going to be easy, but it means He’s always in control,” he added.

Jane Jolley, Knox County Community Engagement director, took the Bible verse from Jeremiah a step further: “If you keep reading a couple verses, it says, “‘He has a plan for those who seek Him,’” Jolley quoted, then added, “So that’s my challenge for you — to seek hard, every day, after that plan God has for you.”