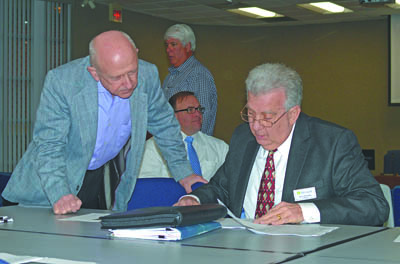 David Craig, architect with Ross/Fowler David Craig, architect with Ross/Fowler Landscape Architecture, Urban Design & Planning, showed elements of proposed plans to Aldermen Ron Pinchok before a Farragut BOMA workshop Thursday, Feb. 28.
Farragut Board of Mayor and Aldermen again wrestled with designs for the next stage of McFee Park during a workshop before its regular meeting Thursday, Feb. 28.

However, this time members came to a consensus to merge two plans presented and then pare down the number of tennis courts from eight to two. “I don’t see a need for eight courts,” Vice Mayor Louise Povlin said.

One proposal, called Plan F, would include a great lawn, a loop trail and an east pavilion. It does not include tennis or pickleball courts, costing about $6.2 million.

Exhibit K, estimated to cost $8.5 million combines features from Exhibits F and J so there is a great lawn and a tennis court complex.

The Town currently has $4 million in its budget for McFee.

Town administrator David Smoak said the Board could decide to forgo the project for now or put more money in the budget for one of the three plans.

“We could not conceivably start construction on this until next fiscal year,” he added.

Alderman Ron Pinchok reminded Board members that in 2015 the Town had $6.5 million in the budget for the project.