Despite heavy rain, spring is in the air 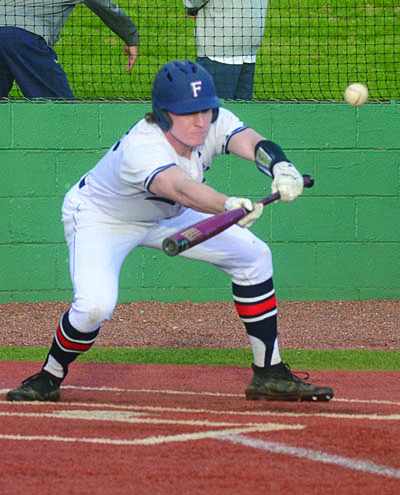 Not allowing a ball to be hit out of the infield during five dominant innings, the 6-foot-5 junior struck out 11 and allowed no walks while giving up just two hits — both weakly-hit infield singles.

“Tonight my fastball and my slider were working best for me,” Hagenow said after the Admirals’ 13-3 District 4-AAA victory in the season-opening game for both teams Monday evening, March 11, at FHS’s John Heatherly Field. “I mixed in a couple of change-up for hitters who were sitting on the fastball.

“He was throwing hard, throwing a good slider, and he’s a big young man,” Admirals skipper Matt Buckner said. “He’s a lot to handle when he gets everything going.”

About King’s third-inning home hit, “It was a fastball; he left it in the middle center half of the plate,” he said about the pitch he sent over the left field fence.

A leadoff hitter last season and a third-year starter at shortstop, King explained his move to the No. 3 spot in the batting order.

“We had to put someone behind Parker (Noland, Class AAA State Player of the Year in 2018 and the No. 2 hitter) so it wasn’t a free walk,” he said.

“Leadoff is a little bit different, you’re often trying to get a rally going,” King added. “The (No.) 3 hole is more laid-back, you just try to put the ball in play to get runs in.”

Senior catcher Ryan McCarthy and designated hitter Hudson Seigler, a sophomore, each connected for two hits, including a double. McCarthy’s drove in a run.

Hunter Merrick, a sophomore, came off the bench and contributed an RBI single.

Cooper Mashburn, a senior, came off the bench and singled.

Alec Nussbaum, a senior, came off the bench and supplied the final run (10-run rule), after being hit by a pitch with the bases loaded in the bottom of the sixth.

“We had some guys come off the bench and did a really good job, got some hits,” Buckner said. “We have a deep roster.”

Despite one throwing error, “We played clean defense,” Buckner said. “I thought Angus played really well at second base.”