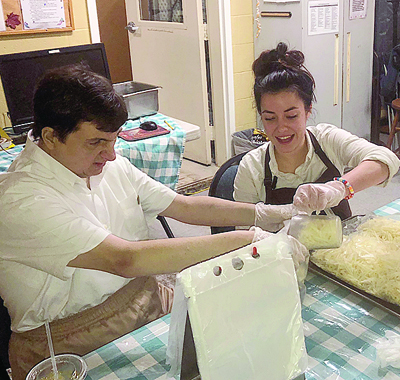 Skylar Coffield and Erika Rennich are now co-workers at the Campbell Station Road Cracker Barrel, thanks to Rennich’s compassion and foresight in lobbying for Skylar to work with her. While these employees are found in the Cracker Barrel gift shop.
Mona Coffield never thought she would see her son, Skylar, have what she believes is a crucial component of a man’s satisfaction in life.

Skylar, 30, is autistic and has a number of health issues that seemingly preclude what his mother describes as “every man’s need to have a sense of purpose.”

“A lot of men (in his position) feel shuttled to places or taken care of or dictated to, but I was hoping for a place that was his.

“It was one of the things we felt was lacking in our son’s life.”

However, through the intervention of a caregiver and friend, Erika Rennich, Skylar has found a sense of purpose through his part-time job at Cracker Barrel’s Campbell Station Road location.

Rennich began helping care for Skylar last year after the family, which includes patriarch Jim Coffield, moved from Florida to just outside of Farragut after Jim started a job on the pastoral staff at Christ Covenant Church.

Rennich, who has worked with a number of special needs teens and youngsters in the past through volunteering and Peer Tutoring opportunities as a Farragut High School student, readily agreed to spend time with Skylar “sight unseen,” Mona said.

It has been a happy arrangement for everyone, with Erika and Skylar spending most Thursdays together, going shopping or to dinner or a movie.

“I love hanging out with him — I really do,” said Rennich, who currently attends Pellissippi State Community College. “I had never worked with adults before, but he has been teaching me so much.

Rennich already was working at Cracker Barrel, and after hearing Mona talk about what she hoped Skylar could experience, she took it upon herself to see if he could work there, too.

“It was all at Ericka’s initiative,” Mona said. “She talked to her manager before she even mentioned it to us.”

Cracker Barrel officials agreed to take on Skylar, and he began training in February, currently working from 11 a.m. to 2 p.m. every Monday.

Skyler said he “likes Cracker Barrel, and likes working there,” which is understandable, as he already enjoyed going to the restaurant before the work opportunity opened up, Rennich said.

Skylar also has given one of his managers the nickname of “Captain Kirk,” she added.

“He has nicknames for everybody but me,” said Rennich with a laugh.

It is just the latest positive step for Skylar, who came to the Coffields when he was just six days old, and was later adopted by the couple, who also have another son, Pearce, and a daughter, Kim.

While Skylar is very bright, and engages fairly well with outsiders — once he warms up to them — he is unable to read or write, and cannot be left alone for longer than an hour, his mother said.

He also is oblivious to physical pain, and between a burst appendix and other health emergencies “there were four times that we almost lost him,” before he was properly diagnosed with CIPA, his mother said.

“It is a rare gene mutation where (those suffering from it)don’t feel internal pain,” Mona added.

“He has had broken bones and vertebrae down through the years that we didn’t even know about. The things he has gone through just breaks my heart. It is a miracle that he is even alive.”

Despite all that Skylar has gone through, his demeanor and personality don’t seem to reflect the difficulties.

“He is very funny and has a great sense of humor,” Mona said. “It is amazing how witty Skylar can be.”

Even through his illnesses, Skylar found some levity.

“His skin looks blue, and all his bones have a blue tint,” Mona said. “One day he asked if he was going to turn into a Smurf.”

He loves Star Trek, especially the character Capt. Jean-Luc Picard, and has many action figures from his favorite shows and movies. He also likes real-life pioneers Daniel Boone and Davy Crockett, and has a fondness for Chuck Norris, too.

Skylar also loves to scare people and play practical jokes, said his mother, who is often on the receiving end of his pranks.

Being able to share all that Skylar is beyond their family and church friends has been new territory for the Coffields, who see his job as an opportunity not only for Skylar, but also for those around him.

“Skylar is just so capable,” Rennich added. “We need to be able to judge people based on their capabilities, not their disabilities.

“And it has been so encouraging to see the hearts of the other employees as they interact with him.”

“Skylar can be a mirror to a person’s soul,” Mona said. “He can show them how they feel about someone who is different. It can show prejudices toward people with disabilities, but it can also lead to compassion for them, as well.

“I am just so happy about this [opportunity for Skylar],” she added.

“I am so glad and thankful for Erika, for having the compassion she does and for helping make this happen. And for helping him find his purpose.”