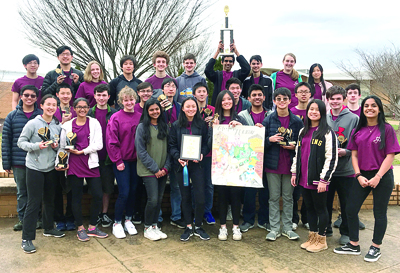 With a 29-member team, FHS had the largest showing, with most of those attending winning first-, second- or third-place in their competitive events.

With the FHS students sweeping the officers slate, the state Mu Alpha Theta competition will be held at FHS next year, according to teacher Jordan Brown, who is a club sponsor along with teachers Angie Buckman, Kelly Gruhn and Jake Gulledge.

“Everyone is very encouraging, and show really good sportsmanship — even those from other teams,” said Brown, who is in her first year teaching at FHS. “They really motivated each other.”

She said all the Mu Alpha Theta club members “work really hard. They are always learning.”

“We take lots of practice tests from previous years,” added Cantu of the training process.

Buckman, who in previous years had been the sole club sponsor, said the additional club sponsors “were a great deal of help.

“I really think that is one reason we stepped it up this year.” Last year, the team won second place overall. While not a prerequisite for attending the national Mu Alpha Theta competition, to be held in July in Las Vegas, Nevada, Brown said many club members are planning to attend.