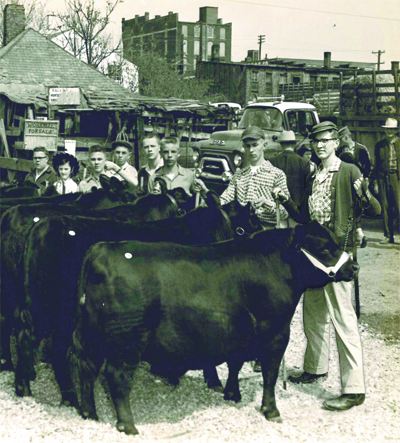 Lafayette Williams, far right, 17, joins other youths for Knox County Steer Show in the Old City part of downtown Knoxville in the 1950s.
Lafayette Williams’ lifelong contributions to the cattle industry recently earned him another accolade.

In February, Williams, 80, who owns Riverview Family Farm along the banks of Fort Loudoun Lake in Concord, received the Distinguished Service Award from Tennessee Cattlemen Association.

Having worked with cattle most of his life, the Concord native developed and operated Knoxville Livestock Center from its start in 1989 until he sold it and retired in 2008.

“I’m as proud of him as I could be,” said his wife, Janice Williams, a former University of Tennessee Extension agent. “I feel like he’s earned every bit of it because I’ve seen what he’s done behind the scenes.”

“I think she sees that today it’s so unusual to see this kind of farm life in this area,” he said.

For Williams, the award simply means, “I have done something for the industry.

“I love people,” he added. “I like helping people.”

Williams is quick to say, “I’m just a simple boy from Concord,” he said, smiling.

“You were an original Farragut Farmer,” Janice said and laughed.

Carrying on at the cattle farm are his son, Byron Williams, his daughter, Rachel Samulski, and granddaughters, Iris and June, who have been involved in 4-H at Northshore Elementary School.

The Distinguished Service Award was not the only recognition Williams recently received from TCA. Its members also named TCA’s Business Person of the Year Award after him because of his livestock industry work.

Janice recalled one example of a farmer from Lee County, Virginia who “who brought his cattle to the Knoxville Livestock Center to sell. “For some reason, something went wrong with the sale. Lafayette left the sale in the wee hours of the morning and drove to this man’s house.”

She remembered when the man went out to do his morning chores, “there was Lafayette to take care of (the man’s) problem.

“That’s unheard of,” Janice added. “He really has a name that is recognized across the nation of cattle producers, and the reason I say that when he first built the market, (the association) saw the market and they wanted to have their national convention here.

“After we did it, they came back several times to do it.”

Born on what was the Prater family farm in Concord, cattle production is in his blood. He remembered helping his father, Walton Williams, with cattle when he was 7 years old.

After graduating from Farragut High School in 1956, he attended and earned bachelor’s and masters’ degrees from UT and was a member of both the Livestock and the Meats Judging teams.

“He knows his meats,” Janice said. “Lafayette is still staying up to date” on cattle production. Saturday, we started taking the Advanced Master Beef class with the University (of Tennessee).”