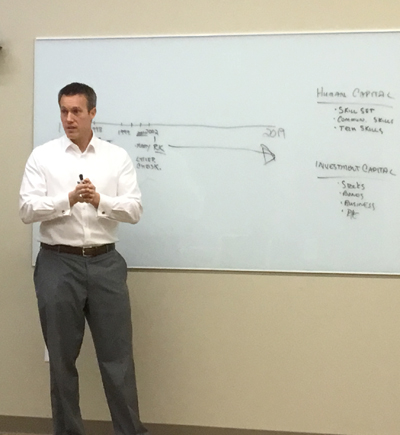 Jeff Hall provides illustrations on the board in his UT class.
The senior financial professional among employees with Rather & Kittrell Capital Managment in Farragut, Jeff Hall was perhaps the ideal person to warn college student-athletes about career building and personal finances.

An All-SEC kicker with the Tennessee Volunteers from 1995 through 1998, Hall had a handful of game-winning field goals during his college football career — most noteworthy during the 1998 national championship season.

Yet for all of his success, “I talk a lot about my own challenges and mistakes I made early on after college,” said Hall, partner and senior advisor for 17 years at R & K, about a 75-minute class he teaches at UT one day in the fall and spring semester for mostly junior and senior student-athletes. “They were driven by a lack of planning my expenses and budgeting.”

Had the older, wiser and more experienced Hall advised the straight-out-of-college Hall, “I would have told myself that the little money that I was making pursuing a professional football career at the time was not going to last,” he said.

Teaching the class “for 11 or 12 years” according to Hall, it has included some well-known UT athletes. Some of them have earned professional contracts, which goes to the core of what Hall warns about.

“Let’s say you sign a $1 million signing bonus (as a professional athlete), I go through all the different taxes you would pay, and some of the expenses you would have, and show you what was left after that $1 million was whittled down,” he said.

“That is typically eye-opening for a lot of them.”

Among for the most common questions, Hall said, “’What are things you did to build a career?’”

Hall said “communication skills” and “building relationships” are critical while “building your skill set” professionally, “so that over time you can deliver that skill set to the people you build those relationships with.

“Helping them understand that that’s what work in the real world is about. … It’s a lot different than work as a student-athlete.”

The class, which runs from 15 to 20 students in the fall and 10 to 15 in the spring, also includes “budgeting and expense planning,” Hall said.

“Periodically, some of them will follow up with me, call me or e-mail me, or want to meet for coffee,” he added.

As for results, “I have had feedback from the folks who facilitate the class, the teachers who provide the curriculum, and they have told me they’ve noticed over time that there have been positive impacts,” Hall said.

Reflecting on preparation at the high school level, “only 17 states mandate a personal finance course, but only five of them — of which Tennessee is one of them — require that that be a stand-alone course,” Hall said.“… I’d have to say there’s a lot of families that may not be proactive in teaching finance as well.

“Financial literacy is just not a priority in this country.”