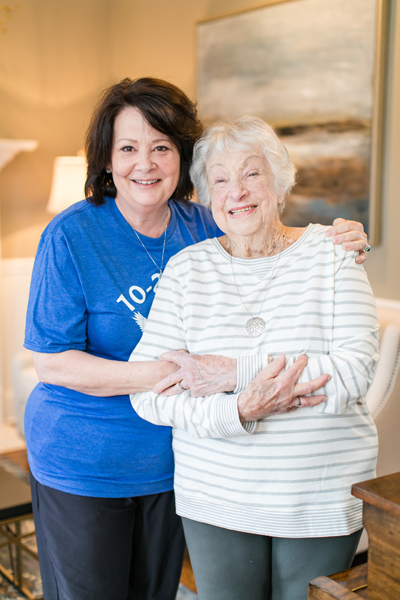 LaVerne and daughter, Karen, who was with her when she suffered a stroke Feb. 2, and recognizing the signs, reacted quickly and helped diminish her mother’s lasting stroke damage.
LaVerne (whose family asked her last name not be used for privacy reasons) is a chipper 89-year-old, even as she recounts a sudden stroke she suffered Feb. 2 that could have taken her life.

She smiles warmly, shares freshly baked banana bread in the Farragut home she has lived in for nearly 40 years, and is amazed she has lived to tell about her experience. “I have questioned ‘why’ I recovered and am here,” she said, as her blue eyes twinkled. “I think it is so maybe I could tell others there are no signs. All of a sudden, that was it.”

Her daughter, Karen, was visiting from Atlanta to celebrate her mother’s milestone birthday and they had just received their food at Red Robin Gourmet Burgers in Turkey Creek.

All of a sudden, “I couldn’t grasp my hamburger,” LaVerne said. Karen, who witnessed her mother’s classic stroke symptom of facial drooping, “realized what was happening right away,” and had the restaurant staff call 911, LaVerne added.

In the ambulance, both ladies discovered only two area hospitals are specifically focused on stroke patient care — Fort Sanders Regional and University of Tennessee Medical Center, and they elected to go to Fort Sanders, arriving within 30 minutes of the onset of her symptoms, said LaVerne.

There, LaVerne was assessed by a T3 Trauma Team, and the family was introduced to Dr. Robert Hixson, a Neuro-Interventional Radiologist with Vista Radiology. After confirming what everyone already suspected, Hixson laid out treatment methods, one of which included a non-invasive procedure that would potentially remove the clot located in her brain.

There was uncertainty involved, as LaVerne was already considered high risk, not only due to her age, but also because she has a pacemaker, suffers from congestive heart failure, has a stint and has high cholesterol.

“Not all outcomes are favorable, but the advancements in radiology make very difficult procedures more feasible for high risk patients like [LaVerne],” Hixson later said.

“He was very frank with the family, and told us about every possible outcome,” said LaVerne’s daughter-in-law, Traci. “He also told us he strongly believed this would offer the best recovery possible. We asked if we could pray over him, and he agreed. We felt good about the decision, and realized it was in God’s hands.”

The procedure, which involved threading a wire to the clot site and removing it, took about 15 minutes, and LaVerne began talking as soon as the clot was successfully cleared, asking “How much longer will this take?” Hixson recalled with a laugh.

Her recovery from the procedure was quick, and she was discharged from the hospital the following day.

“The people at Fort Sanders were all so fantastic, they just were,” said LaVerne. “I hate hospitals, but not that one. I would go back there — hopefully not soon! But if I needed to I would go back.

“Many patients do not realize Neuro-Intervential Radiology [is available and] offers faster recovery time and less pain compared to traditional surgery,” said Hixson.

“Traditional treatment would have involved a craniotomy,” in which surgeons open a patient’s skull to get to the clot site, said Michelle Borja, who works with Vista Radiology, and helped share LaVerne’s experience. “Every 40 second, someone suffers from a stroke.Overall there is a lack of awareness not only for the signs of a stroke, but of the treatment options. Neuro-Inerventional Radiology offers a non-invasive approach to quickly remove the problem.”

“God bless him,” LaVerne said of Hixson’s intervention. “I sure [didn’t] want my head cut open.”

Borja said the procedure itself is not a new one, but has been used over the last five years.

“It’s really a matter of awareness, of what options are out there,” she added.

“Knowledge is power when it comes to health care,” said Traci

It’s also a matter of knowing the warning signs [of a stroke]” added Traci. “And realizing time is crucial, too.”

In addition to that awareness, LaVerne’s extensive family, which also includes sons, Rob, Tom and Roy, Karen, seven grandchildren, and three great-grandchildren, is taking things a step further by starting a “10/20/30 for Vernie” fund-raiser and exercise initiative, with all monies raised going to the Fort Sanders Regional Stroke Team.

Traci said anyone could join the effort by visiting 102030forvernie.com. Those making a donation will receive a “Stroke Signs” magnet to help raise awareness, she added.

“We just wanted to show LaVerne we are there with her, and we will start walking with her, so we thought about making it kind of a game or a contest — we are all pretty competitive. And this way we can raise money and awareness, and thank Dr. Hixson and the team for what they did for us.”

“It’s just for the grace of God that I’m here,” LaVerne said. “I know God kept me alive for a reason, and sharing with others about the warning signs of a stroke is what He wants me to do.”