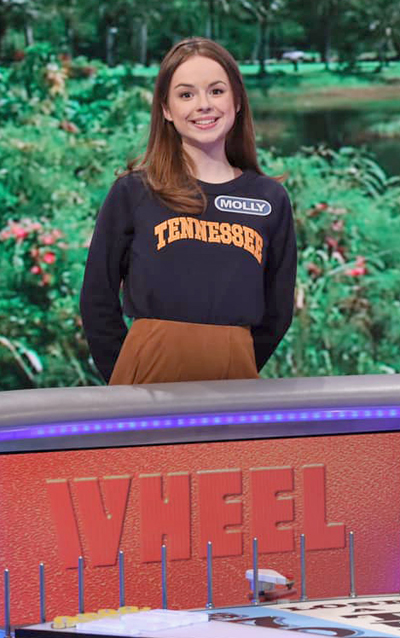 The Farragut High School graduate and University of Tennessee senior solved two and won a total of $12,750 as one of the big winners on the syndicated show’s College Week Spring Break segments broadcast locally Thursday night, March 21.

Rodabaugh’s appearance was taped in February, and she had to stay mum on the results until after the broadcast — but she eagerly shared details Friday, March 22, by phone.

“It really was a once-in-a-lifetime opportunity,” she said. “And even though I was nervous, once I saw all the other college students I felt a lot better.”

She said “about 18” students participated in the College Week shows.

Before she went on, Rodabaugh said letter-turner Vanna White came into the students’ dressing rooms to meet them.

“She was really friendly,” Rodabaugh said, and noted they didn’t meet host Pat Sajack until the end of the show.

Rodabaugh said some of her fears were alleviated by being able to see the stage up close, as she has a theater background.

“It was interesting to see how our shows (compare) verses that show they have been doing for 50 years, every day,” she said. “It was really interesting.”

Her interest in the staging ties in with her major at UT, which she was able to design herself through the college’s Scholar’s Program.

“If they don’t have a degree in what you are interested in, that program allows you to design your own major,” Rodabaugh said, noting her degree will be in theme entertainment design when she graduates in May.

“It was really exciting to be able to learn about what I was passionate about,” she said.

On the show where Rodabaugh competed, she quickly solved the very first puzzle, which was “choosing electives,” and won $1,000 for the effort.

She was disappointed on her next attempt, however, because of the game’s rules. It was a crossword clues category, and she added an “and” to the answers “corn, tomatoes, peas, spam.”

Following the loss, Sajak apologized to Rodabaugh for how stringently the rules are applied in that category.

She roared back in the next round, winning more than $10,000 as she solved “eating frozen yogurt.”

It was to be Rodabaugh’s last score of the game, but she was allowed to keep her total winnings, which she said would be released to her three months after the show aired.

“That is really going to help me pay off some student loans,” she said.

Her parents, Kevin and Janice Rodabaugh, traveled with her to California for the taping.

Ironically, it wasn’t even Rodabaugh’s dream to compete on the game show. Her mother had sent in an audition video late last year, and after being selected for another round in the selection process, took Molly with her to Nashville for an in-person try-out.

“The e-mail she got said she could bring somebody,” Molly recalled. “So we both auditioned, and I got picked for College Week.

“Honestly, I never would have thought about doing it for myself,” she added. “I’m really shy.”

There were no hard feelings. “My mom was still just as excited for me” to be chosen, Molly said.

“I just hope she does someday, too.”