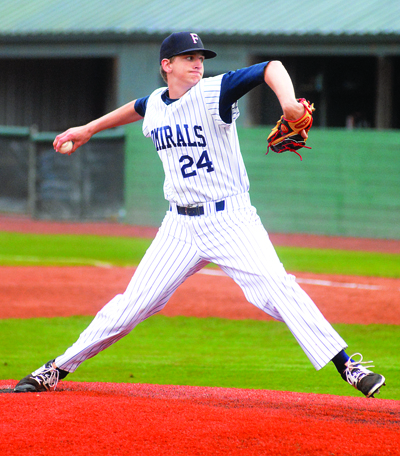 With at least one professional scout on hand at The Ballpark at Farragut/John Heatherly Field on a damp Monday evening, March 25, Farragut junior Ryan Hagenow went the distance (five innings) against District 4-AAA rival Heritage, striking out 10 while allowing just one hit and three walks.
A challenging five-game swing in Florida during Spring Break saw Farragut baseball win three against ‘‘some of the better teams in the country,” FHS head coach Matt Buckner said. “I thought we held our own well. It gets us ready for down the road.”

Meanwhile, the Admirals were back to their run-rule domination in District 4-AAA Monday evening, March 25, versus Heritage.

With a pro scout on hand at The Ballpark at Farragut/John Heatherly Field to evaluate the Admirals’ talent, pitcher Ryan Hagenow was clocked “between 87 and 91 (mph),” Buckner said.

The 6-foot-5 junior again dominated in a five-inning 11-0 Ads victory, striking out 10 while giving up just one hit and three walks.

Offensively, star third baseman Parker Noland, a Vanderbilt signee, smacked a two-run homer in the bottom of the first inning, then added an RBI single in a six-run bottom of the fourth.

Looking back, “We played pretty well in Florida. We competed with a lot of good teams,” said Noland, a four-year starter at third base who’s now a senior. “It was really good for us.”

Cooper Mashburn came off the bench to stroke a two-RBI double in the fourth. Ryan McCarthy, senior catcher, and Ashton King, senior shortstop, each connected for an RBI single.