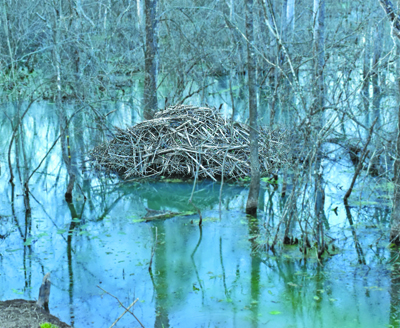 Beavers built this lodge in the center of wetlands abutting Park Place subdivision.
Beavers are causing some consternation for Park Place residents and Town of Farragut officials.

While at least one resident complained about the animals’ destruction of trees and vegetation, near and downstream from where a very large lodge and dam have been built in wetlands just east and south of Farragut Town Hall, some of the neighborhood residents want the animals to be left alone.

Town officials put out a notice Monday, March 25, acknowledging the issue of tree damage was raised by the unnamed resident, and stated it had contracted with Varmint Busters — described as a “Tennessee Wildlife Resources Agency-certified animal damage control operator” — to trap and relocate the animals.

The Town stated in an informal press release that “in order to provide relief to the property owner, traps were placed near the edge of the wetland” the week prior.

“As the beavers have built (the dam and lodge), it has been very destructive,” Town Mayor Ron Williams said. “The potential damage, if we let it be, is that whole tree stand could be gone.”

Internet sources state an adult beaver can fell an 8-foot tree in as little as five minutes, or a 5-inch in diameter willow tree in three minutes. Wildernessclassroom.com went on to state that a pair of beavers could take down as many as 400 trees annually.

In addition to the vegetation destruction, there also was some concern by officials that the dam itself, which looks to be the length of a football field, could potentially contribute to future flooding.

“When they build (dams), it causes the water to go different ways,” said Williams, who added the stream running through that area of wetlands “had been moved 60 feet” with the dam’s construction.”

Town officials stated in the

information shared that one beaver had been trapped

an undetermined site away from the Town.

However, once apprised of the situation, Park Place resident and former Knox County Commissioner Mike Arms, whose property drops down toward the wetland area where the dam

and lodge are located, took issue with the Town’s decision to trap and relocate the animals, and noted the traps were initially

set on the neighborhood’s HOA property.

While Arms said the Town and staff “do an outstanding job,” and he, overall, has no complaint with the Town of Farragut, he believes “there is a difference of opinion in keeping the beavers versus removing them.”

In an e-mail last week to Town administrator David Smoak, which Arms said was a follow-up to a discussion the two had

earlier in the week, Arms thanked Smoak “for recognizing our neighborhood concern of

placement of beaver traps on

Additionally, neither Arms nor HOA president Joan Bertini believe the beavers pose any real danger in the community, and also believe they should be left alone. “I walked the total

wetland area during the recent flooding and saw no results of flooding to residents or businesses from the beaver dam,”

“I really don’t see a problem with the beavers,” said Bertini from the wetlands area last week. “If they can’t live in the wetlands, where can they live?”

Another separate issue, which Town officials noted, was the

traps initially placed apparently were sprung by a person or

persons unknown, which led to the traps being “temporarily

report the tampering, which

“At the report of trap tampering, we responded,” Smith added. “We typically go out and make a presence with the hope we don’t have to cite anyone. We are just hoping that everybody will just get along.”

When asked about the issue late last week, Smoak confirmed plans remain to trap the beavers.

“They are on Farragut Town property and will be relocated,” he said. “They just need to be somewhere away from residential areas.”