True citizens step up at CUMC 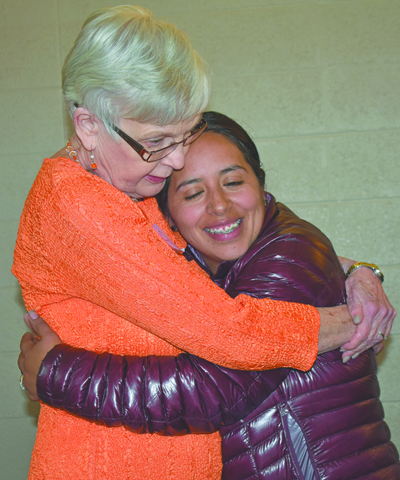 Ivana Romot and her husband, Andrew Romot, Agnieszka Parys, Khrystyna Bednarchyk and Blanca Turrubiartes, all of whom already have their green cards, completed Citizen Preparation Classes and celebrated with a reception March 16 at the church, where they also received certificates of completion.

Program manager Carole Conklin, along with volunteer teachers and even U.S. Rep. Tim Burchett (R-2nd District) helped the graduates and their families happily acknowledge their accomplishments. “Immigration is a hot-button issue, but we want people to know our church is a safe place, and we have many people here for our relational ministry,” said the Rev. Glenna Manning, who is the church’s pastor of discipleship and outreach.

“We are called in the Bible to care for ‘aliens’ in the land who are ‘in our midst and are not natural to this place,’” she added.

Manning also said the church previously had held classes on faith and immigration, and this Citizen Preparation Class was a natural next step for the congregation.

This was the first class held in Farragut, but was not the first in Knox County. Geri Mulligan and her husband, Charlie, started citizenship classes locally in 2010, and just recently oversaw their 47th class.

With that background, which also included leading citizenship classes in New Jersey, Geri helped get the Farragut class started.

“We came here, and I worked for UT, where they had (English as Second Language) classes, but nothing like a citizenship class. My husband and I and another person wondered how we would do this.”

Determined, they figured out a way and started Tennessee Immigrant Empowerment Solutions in March 2010, which also offers related services such as a “Drive Out of Poverty Class” to help immigrants get their driver’s license.

“The people [here in Farragut] have done a marvelous job,” said Geri. “Carole started it, and did the teacher training. They were all fabulous, as many of the volunteers were already teachers.

“They love what they are doing and it shows.”

The students were thrilled with the experience.

“I just want to tell everybody ‘thank you’ for everything you guys did for us,” said a tearful Turrubiartes, who lives in Maryville and is originally from Mexico. “I am just grateful to be here.”

Parys, who is originally from Poland and also lives in Maryville, said “There are very nice people here,” and that said she enjoyed learning about the history of the United States.

Judy Linn, who co-taught one of the classes with another teacher, said she, too, “enjoyed it immensely. I’ve learned a lot too.

“The students were very motivated.”

Bednarshyk, who is a native of the Ukraine and currently lives in Farragut, said Linn “taught me a lot about her country. I am really looking forward to taking the [Citizenship] test.”

Andrew Romot, who has been in the United States for 8 and ½ years, said he “was very happy” about participating in the class.

“It was a very good study, but I want to learn a little more.”

“It was a great school, a great place, and I had a great teacher,” Ivana added. “I really appreciate everything,” and noted she is “nervous about taking the test.

“I just want to be sure we are ready. I wanted to start this process [after so many years] because we have kids and grandkids here. We will probably die here.”

“America represents something universal to the human spirit, and is one of the sources of American greatness,” Pastor Manning said. “”We draw people from every corner of the world, and that is our strength.

“[When] we began services on faith and immigration, we wanted this to be a place where people would feel welcome,” she continued. “These classes may be over, but you are forever welcome here, where you will be embraced and loved and accepted for you.”

When Andrew was asked if his goal was to be “official” in the United States, he said, “I am already official – I just want to be more official.

“I want to be an American.”