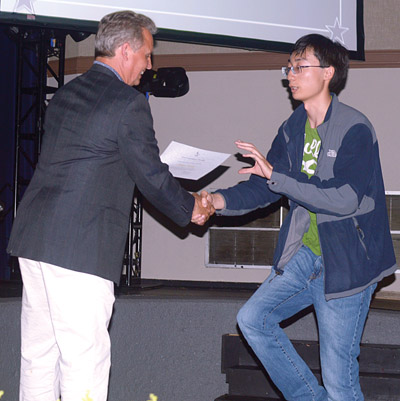 “These kids have touched me on such a personal level,” FHS math teacher Angie Buckman said as she presented awards to her students, Erika Yang and Elliot Fang.

“They just won our hearts,” she added as she related how they showed her compassion during a time she was out sick.

The two seniors were among 73 who earned accolades — from department awards to scholarships to community awards.

“We’ve got a phenomenal school here,” assistant principal Steve Killian said, adding this is his first year at FHS. “You just can’t do better.”

Students were lauded by teachers and staff for their drive, hard work, reliability and spirit. The event was an opportunity to recognize the salutatorian, Elliott Fang, while the valedictorian will be named at graduation Saturday, May 18, in Thompson-Boling Arena.

Annual Charlotte and Lendon Welch Scholarship, which honors the late FHS teacher and coach Lenden Welch and his wife and teacher, Charlotte, went to Jakob Allison for track and field and David Mashburn for football.

Two seniors will have their education paid for by the U.S. military. Alleyah Lynch received a $63,000 ROTC Air Force scholarship to the University of Tennessee, as well as a $900 per year textbook scholarship and a $300 monthly allowance that increases each year up to $500. She would graduate college as a commissioned officer.

Conner Taylor received a $180,000 ROTC scholarship from the Navy.

• Another Beacon Award went to John Gray and Aaron Miller;

• The Shoup Scholarship went to Nicholas LiMandri; and ...