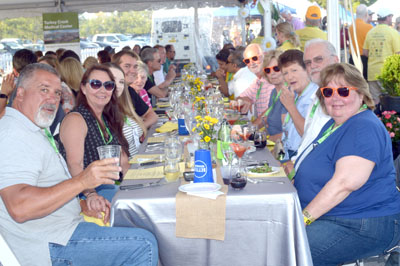 Enjoying the Very Important Bites tent are, from front to back on the left, Graddy family members Mark Cammarata, Shari Graddy, Amber Hultin, Mattie Hultin and Jean Hills. Graddy family members, from front to back on the right, are Sharon Davis, Skip Skelton, Amy Skelton, Linda Graddy and Darrell Graddy.
Close to 100 people gathered under the Very Important Bites tent to enjoy the sit-down gourmet experience during Shop Farragut’s The Taste of Farragut.

Couples, families and co-workers were treated to a five-course meal, after which they could roam around the other booths and taste various samplings.

Among the participants, Jonathan Jackson and Meghan O’Brien said they received VIB tickets from a friend.

“I grew up around here, and I heard about (the event), but this is my first time coming,” O’Brien said. “We weren’t quite sure what to expect.”

“I wanted to try the food from First Utility District,” said Ronnie Davis, an FUD assistant general manager who came with wife, Donna.

The VIB was a chance to “give the staff a bonus from me,” FUD general manager Bruce Giles said. “It was just to support our folks.”

Attending the VIB was “something I’ve never done before but always wanted to do,” said Barb Wilson, who arrived with Andrew Howard. She added she saw Water Into Wine was one of the sponsors.

“I chose to come because, like any good man, I always listen to (Wilson),” Howard said, smiling.

The event was a first time for Mark Cammarata as well. “It’s good,” he added.

“Oh, I love it,” said Sharon Davis, who has been to The Taste of Farragut — formerly known as Farragut Food & Wine Fest — for the past three years. “It’s a great way to know some of the businesses and what they serve.

“It’s nice to get samples of what they serve,” she added.

“It’s a very different event,” said Wayne Jones, also a first timer. “The food is outstanding and the wine is pouring, which is even better.” His favorite part of the meal was the entrée.

“The meat and the pork were just wonderful,” Jones said.

Jim McCulloch, Scotland native residing in Cedar Bluff, said he would come all the way from Edinburgh to The Taste of Farragut.

Although this was his first time at the event, McCulloch noted, “I’ll be a regular now. It was very well-organized.”