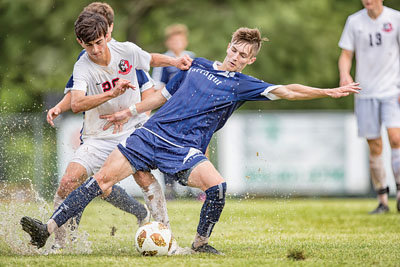 It was a soggy pitch at Farragut Soccer Stadium, as FHS senior forward Wes Jeter (blue) battles a Maryville player for the ball.
A soggy field plus an early indirect kick for the visitors, which Maryville converted from 15 yards out, could have caused some frustration among an explosive Farragut team slowed down somewhat by the conditions.

But the Admirals tied this District 4-AAA Tournament title showdown about one minute later, then went ahead for good a few seconds after — with a standout Admiral recording his first career two-goal game — en route to a 4-1 win at Farragut Soccer Stadium Saturday afternoon, May 11.

“We just knew we had to come and get something back quickly,” said senior Wes Jeter, a forward who scored a goal while adding two assists for the Admirals (17-2-1).

But it was senior Alec Arnold, center-midfielder, who picked a nice time to have his first career two-goal game.

“I was just thinking, ‘we’ve got to put it in the back of the net because we want to play (region) at home, not on the road,’” Arnold said about his mindset, as the Admirals hosted District 3-AAA runner-up Oak Ridge Tuesday evening, May 14 (after deadline), in the Region 2-AAA semifinals.

Farragut had to win this game to keep its season alive.

Against MHS, Arnold took a diagonal pass from senior midfielder Pablo Herrera and scored from about 12 yards out, in front, in the 21st minute to tie the score.

By falling behind early, “I think it kind of just made us realize that we’re going to have to press a little harder,” Arnold said. “Just raise the intensity a little bit, because I don’t think we started out the game as intense as we should have.”

Less than a minute later, Jeter beat his defender with a nice move to create space, then shot and scored from about 20 yards out to make it 2-1 Ads.

Early in the second half, Jeter found an open Arnold in front of the net, and made an accurate feed from the left side. Arnold took the pass in mid-air with his right foot, from about seven yards out, and popped it home in the 45th minute. Farragut now led 3-1.

Roughly 15 minutes later, Jeter set up junior forward Avery Hathaway just outside of the box in front, with Hathaway spinning around and drilling home the Ads’ fourth goal.

“He did all the work on that one,” Jeter said about Hathaway’s goal.

“Avery Hathaway was another one who stepped up,” Dover said. “… I’m glad some of our younger guys stepped up.”

About the soggy conditions, Jeter said, “It was kinda tricky because on some parts of the field (the ball) would skip, but on other parts it would stop, so you’d really get confused. You had to read it.

“It just made moving the ball a little more difficult,” he added.

“It did slow us down a little bit,” Dover said. “But that’s senior leadership, because they made the adjustments they needed to.

“… I was impressed with how they recovered.”

Brandon Keane, Farragut senior goalkeeper, stopped a breakaway goal chance early in the first half — no defenders back — by quickly charging the wide-open Red Rebel attacker and stopping the shot.

He also had a diving save late in the second half.

“It’s disappointing because I thought we generated scoring chances in the first half,” Red Rebels head coach Steve Feather said.

With the Ads coming back quickly from its 1-0 deficit, “I think it showed a lot of character out of Farragut,” Feather said. “Farragut’s a really talented team. They’ve got a bunch of seniors.”