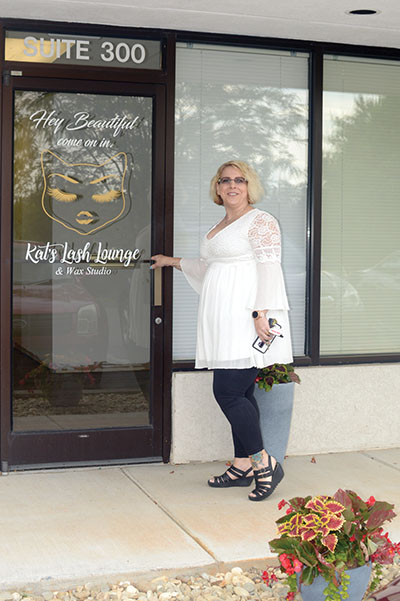 After having a salon at Saah Salon Suites for nine months, Kat’s Lash Lounge & Wax Studio’s business has grown, and owner Kat Mahn has moved the salon across the street, next to The Bark Place, at 11410 Kingston Pike. Mahn opened Tuesday, June 4. A ribbon cutting, hosted by Farragut West Knox Chamber of Commerce, is set to begin at 4 p.m., Friday, July 12.
Kat Mahn, licensed aesthetician and owner of Kat’s Lash Lounge & Wax Studio, has moved her business from Saah Salon Suites, 102 S. Campbell Station Road, across the street adjacent to Bark Place at 11410 Kingston Pike, Suite 300.

“We’re super excited because we’ve outgrown our space at Saah Salon, where we had that 200-square-foot room,” Mahn said.

“It’s been fun, getting all the stuff, picking paint colors,” she added. “Designer Sherri Lundy, an interior designer and my friend, helped me.”

“We’re going to have 1,400 square feet in this new space,” Mahn said. “I don’t think we’ll have any trouble filling all the space.”

Featured are “four treatment rooms — they are all really big. We’re going to have one room set up just for spray tans,” she said. “... Two rooms set up just for facials, waxing and lash extensions, and we’ll have a fourth room that we’re hoping to have someone in there who does injectibles — Botox, fillers and things like that — and add that (service) into our repartee.

“Folks will be able to sign up for our unlimited monthly spray tan package. They can come any time they want and get their tans,” Mahn added.

She also has her own make-up line, which is expanded at the new location, Mahn said.

Along with the space shortage, Mahn also realized she could not meet the demand of “people calling for services.”

The new location also allows expansion of her staff.

“We will be able to get people in sooner, so they won’t have a wait time,” Mahn said. “Nobody wants to wait.”

“So, it’s been less than a year,” Mahn said. “We’re super excited in how Farragut and West Knoxville have just embraced Kat’s Lash Lounge and helped us to grow and expand.

“We’ve been very blessed,” she added.

Mahn added she also could work outside those hours by appointment. To book an appointment, go to katslashlounge.com or call its new phone number, 865-392-1014.