Could Town score a ‘Hole-in-one?’

TopGolf’s newest U.S. site could be in Farragut if parties agree on terms 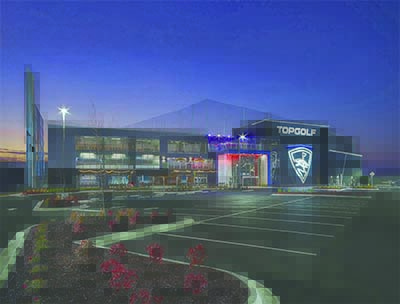 The unique international sports entertainment company TopGolf, which is considering building in Farragut along Outlet Drive, has 54 locations worldwide.
Farragut could get a “hole in one” if TopGolf officials and Town planners can come to terms.

Todd Waldo, director of real estate development for TopGolf, presented a concept plan via slideshow, which showed color renderings of several vantage points of the proposed structure and multi-acre property.

Waldo said this plan offers “a brand new concept for TopGolf,” as it would also include an outdoor component and miniature golf.

Its centerpiece, a sleek two-level, three-sided building with the TopGolf logo built into the structure, would front Outlet Drive and contain a restaurant and bar, both of which would be open to the public — not just TopGolf guests.

Behind, it would offer an “open” side of the building, with 72 hitting bays overlooking a multi-acre netting-enclosed outfield that would be visible from Interstate 40/75.

Additional plans call for a separate hotel and restaurant to be constructed alongside the sports complex, Waldo said. He introduced Colby Price with RealtyLink as the project’s development partner.

If agreements can be reached, Waldo said construction would begin in 2020, and the facility could “hopefully open by early 2021.”

Following Waldo’s presentation, FMPC members discussed the plans for about two hours. Community Development director Mark Shipley already had prepared at least three pages of notes pertaining to TopGolf’s typical construction requirements that either conflict with current Town codes and specifications, or are not addressed by them.

Adding and expanding to the Town’s current C-2, R/W (Regional Commercial Retail/Warehousing) code could address some of the issues, Shipley told the Commission.

That particular area along Outlet Drive has been eyed by officials as an eventual “entertainment corridor” designation according to ongoing discussions between Town officials.

Planning Commission member and Vice Mayor Louise Povlin made note of that possibility, as did Town administrator David Smoak.

Regarding specifics of TopGolf’s plans as presented last week, two issues seemed to be potential sticking points: composition of the building’s façade and the planned use of oversized 30-foot by 50-foot television screens on and around the golf infield.

“That is going to be something I will struggle with,” said Myers, who along with his brother, R. Knick Myers, are long-standing area builders and developers. “The Town has spent over 40 years trying to reduce or eliminate visual clutter … and has held many developer’s feet to the fire” to enforce those façade requirements.

Later during discussions, Myers said he would like to see the developer agree to additional masonry considerations.

“I would like to see (a compromise) somewhere between 11 percent and 75 percent,” he said.

Commissioner Jon Greene said he didn’t “have a problem with the architectural plans ‘as is,’” and Povlin concurred.

“If we are going to allow (different designs) we will need to have really good reasons,” Mayor Ron Williams said.

As the meeting concluded, Waldo said, “it is pretty clear we will not resolve this tonight. I would like to suggest you give our team some time to digest this and determine whether we could meet a little closer” to the FMPC requests.

Williams was upbeat and hopeful in a phone interview the day following the meeting.

“We have the location they want, and they have the business we want in Farragut,” he said, noting he had been working to help secure this project since last fall.

“We just have to work together to figure out the best solution.”