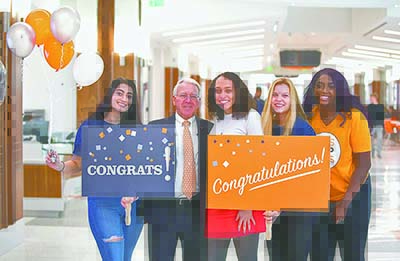 “Recognition as a Torchbearer reminds us all that those who bear the Torch of Enlightenment shadow themselves to give light to others,” a press release from UT stated announcing the winners.

Stephens, who graduated from FHS in 2015, was singled out through her body of work, she explained, although she noted, “I didn’t think I was in the running” until being officially notified in March.

“It is a holistic award that taps students who live out the Volunteer Creed during our time at the university,” Stephens added. “it is also about how you have invested and given back to your community, too.”

According to the UT Chancellor’s Honors Banquet program, where she and the others were honored earlier this year, a big component of her recognized work was through her involvement with UT Student Government Association.

“When the Rock (a huge piece of stone often painted to promote events) was defaced with Nazi symbols last fall, Stephens, serving as student Services director for the SGA, was instrumental in developing a passionate and sensible solution that took hate speech seriously, but also preserved the joyful freedom of students to paint,” a program press release stated.

Stephens was a Chancellor’s Honors student, majoring in English and minoring in leadership studies, and was recognized with the 2018 SGA SEC Outstanding Student Leader Award, among her many achievements.

Stephens’ immediate plans include working during the next year, then to attend graduate school in higher education studies with an eye toward working in college administration.

Stogsdill graduated from UT with an honors degree from Haslam College of Business in Public Administration and minoring in Russian studies and economics.

Among her college activities were Leadership Knoxville Scholars, Student Alumni Associates, SGA and service as a Baker Ambassador and scholar through the Howard Baker Center for Public Policy.

“Thanks to her leadership in the planning and implementation of a voter education drive, more than 500 students registered — contributing to a record-breaking turnout,” the program stated.

“Probably the activity I spent the most time on and I was most passionate about was being the coach for the three years of the Tennessee Speech and Debate Society,” Stogsdill said about UT’s only debate team on campus — for which she won two national debate awards.

“It is a true honor to be named a Torchbearer …. but I think it’s critical to know that there are so many students on this campus who do the work I’ve done and it doesn’t take this award to carry that metaphorical torch. Try to create a better campus and you, every day. We can all be Torchbearers if we try.”

Stogsdill said she is moving to Washington D.C. “for a year or two,” and working on Capital Hill before pursuing a law degree, with plans to practice law in the public sector, “perhaps in the Department of Justice or for a public defender’s office.”

Toth, also a Chancellor’s Honors student in the field of chemical engineering, was described in the Chancellor’s Honors banquet program as not only an exemplary student, but also “a compassionate and relatable leader” with a “Mary Poppins-like ability to find the fun in service ... .”

He was student coordinator for the VOLbreaks program, an Ignite team leader and student director and a Leadership Knoxville Scholars participant.

Within the Ignite Program, Toth also became student director for Ignite Knox, and helped redesign the program that introduces students to the City of Knoxville.

Toth also led groups of his peers on alternative break trips where they worked hands-on with individuals dealing with homelessness and poverty.

He is interning in U.S. Rep. Jim Cooper’s office in Washington, D.C., this summer, and said he “will be taking a gap year to work in the Knoxville community before entering medical school in the fall of 2020. I aspire to be an emergency medicating physician, who devotes time to to promoting preventive care and community-based health initiatives.”