Getting off the road, Ott settles in as Fox Den general manager 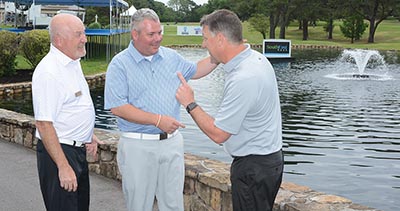 Ott already called Farragut home. He coached the middle school golf team for three years before making the move to Fox Den in January from Tennessee National and Troon Golf.

The big challenge now — other than helping wife, Stephanie, raise a couple of awesome teenagers — is to attract tech-savvy millennials to the country club scene.

He also made sure everything was ready to showcase Fox Den for the 30th Annual Knoxville Open (held Thursday through Sunday, May 16-19) and 21st in a row at the Farragut club.

It is an impressive legacy that began when William Byrd & Associates began course construction in the spring of 1968. The planned community was mapped out by insurance executive Chester A. Massey.

“We are always looking for ways to do it better,” said Ott, who had been with Troon Golf for 17 years and also was a regional consultant for several clubs. “There are lots of cars in the parking lot and that’s always a good sign.”

Because Ott was doing so much traveling for Troon, he grew to miss his family more and more. Stephanie teaches fourth grade at Farragut Intermediate School, and their children, Hayden (17) and Lindsay (15), both play on the high school golf team.

Ott is a native Californian and earned a marketing degree at Loyola Marymount University, where he also played baseball.

While he and many others in the golf industry breathed a huge sigh of relief when Tiger Woods won the Masters and the global “Tiger Effect” that accompanied it, Ott knows the country club scene must adjust to rapidly changing times.

“Technology is a big part of it and we have a lot of great things going on — or in the works,” Ott said. “It can mean so many things to so many different people.”

It can sound as simple as being at the pool and using a smart phone to place a food order for a family of four. Does the staff react correctly and quickly?

There’s no doubt the millennial age group (23 to 38) has become “click happy” and crucial to any business these days. Young consumers born from 1981 to 1996 now represent more than one-third of all buyers.

Fox Den has added an under 40 membership to try and keep up.

“I think golf as a whole is in a pretty good place,” Ott said, “as clubs figure out how to embrace many different challenges.”

After a recent count, Fox Den had 343 full-golfing members. The initiation is $1,500 with a food and beverage minimum of $225 per quarter.

The goal is to increase the initiation if membership hits 350 and again at 375.

To continue to grow and prosper, there’s no doubt that all age groups are important. A viable future just hinges on attracting a younger crowd that may not have five hours to devote to one round of golf.

“I am on the Generation X side,” Ott said. “I also know as a PGA member that we must make the whole golf scene relevant to all age groups.”

In his previous job at Troon, Ott said managers would brainstorm how to add members and keep them “engaged and involved.”

“That engagement piece is the most important part of it,” he said. “That’s why the under 40 membership is there. We must continue to grow that segment, and it gives longevity from the club side.”

At least now when he logs off the computer, Ott gets to stay at home. Too many days in the previous four years were spent living out of a suitcase.

“It’s tough to be on the road so much,” he said. “When this opportunity came up at Fox Den, I was lucky enough to be the one that got the position.

“We love the Farragut area and we love the people,” Ott added. “My in-laws left Las Vegas and moved to Florida, and now they’ve decided to move up here. We’re not the only ones that think it’s a great place — everybody else does, too.”

There’s just one thing … Hayden and Lindsay are growing up way too fast. They are both going to be driving soon.

The younger crowd may have to Google that … or locate a member. LOL