Brothers earn membership to national School of Rock All Stars 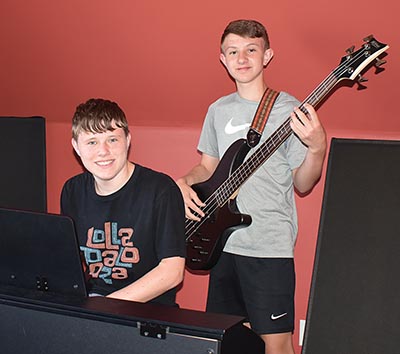 Ethan Franklin, seated, and his brother, Logan Franklin, have a very busy summer mapped out. Not only have they been chosen to perform with the national touring School of Rock All Stars, they — and six others from the Knoxville branch of School of Rock — played at the Bonnaroo music festival in Manchester Sunday, June 16.
Brothers Ethan and Logan Franklin will spend two weeks this summer not only doing what they love best — playing music — but also doing it for several large scale audiences as members of the national School of Rock All Stars.

Following several rounds of auditions, the two, who are students at School of Rock’s Knoxville franchise near Pellissippi Parkway, learned earlier this year they had made the cut, even though they will be working across the country from each other.

Ethan, who will be a junior at Bearden High School this fall, will be playing keyboard for the West Coast All Star Division in several venues, kicking off in Seattle, then swinging down into Portland, Oregon, and concluding in San Francisco.

Logan, a rising seventh-grader at West Valley Middle School, will represent with the East Coast Division, playing bass in New York, New Jersey and other sites, leaving about a week after his brother’s tour starts.

Additionally, the brothers joined six other Knoxville School of Rock students who performed this past weekend at Bonnaroo.

“Music means a lot to me,” Ethan said. “I got my first drum set when I was 3 years old and banged the living crap out of it until I started taking drum lessons.” It will be Ethan’s second year performing as an All Star, but it will be the first for Logan, who finally made the cut this year after competing twice previously.

“The All Stars is a good experience, and I got to meet a lot of good people,” said Ethan, who last summer played the Kid’s Stage at Lollapalooza. “And this year, I know it will be fun again and I will be able to meet some more friends.

”They estimated about 15 to 20 performers make up each team. “It’s not like there is a certain capacity,” Logan said. “Every year, the amount changes, and you are not guaranteed (a spot). But if you are good enough, you will probably make it again.”

While the boys’ father, Greg, owns and operates the Knoxville School of Rock Franchise, they certainly were not guaranteed any preferential treatment in the tryout process, which began with submitted videos of their performances.

The closest location for physical tryouts was St. Louis, so the boys relied on Face Time and chat rooms to continue the lengthy process. Also helping them win their slots is the tremendous amount of time they both put into their crafts, not only at the music school but also through other musical avenues.

In addition to being a member of Knoxville Symphony Jazz Youth Orchestra and his school marching band, Logan attained first chair Jazz Division for all of East Tennessee at All State East Jazz Clinic during the last school year.

Ethan is a member of the Bearden High School Marching Band and its jazz band, and placed first chair in the Blues Band on jazz drums.

“I just don’t know if they can appreciate that only .4 percent of students make it to the All Stars,” Greg said, adding that six Knoxville School of Rock students made it to the finals for All Stars.

Ethan actually led the way in getting his family into the music business.

Greg said he showed musical talent not only with the drums, but also later on the keyboard — and his continued interest, along with Logan’s in picking up the double bass, in part led Greg to purchase the School of Rock Knoxville franchise in 2015.

“(Ethan’s) music was why we opened School of Rock and why we chose it from an investment side,” said Greg, adding Ethan has a mild form of Asperger’s syndrome. “Then to see his first standing ovation, and how his confidence changed — just everything about him — what music means to him shines in everything he does.”

Greg said between the brothers, Logan “is the hardest worker. The Symphony has been amazing for him. I think it gives you that extra edge when you play that type of music all the time.”

Greg’s mission has expanded over the last nearly four years to include the more than 300 students currently studying at School of Rock, and he sees in them “what music does for kids, and how they carry themselves — it’s just magic.”

Greg said nationally the School of Rock franchises “really have some of the best musicians in the whole entire world, and people are starting to recognize that,” as he acknowledges his own sons among that elite number.

“They are both really good — like next level good,” he added. “I am just so proud of them.”