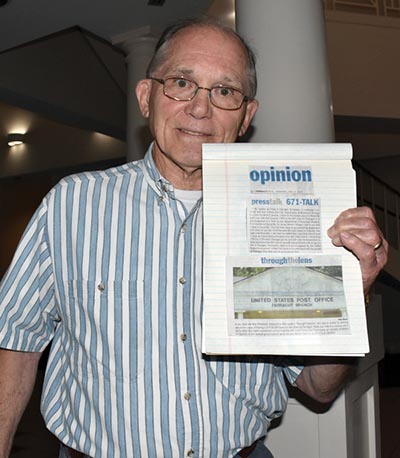 Farragut resident Jim Caldwell brought a cut-out copy of the farragutpress Through The Lens and Presstalk from the Thursday, June 13, issue to Farragut Board of Mayor and Aldermen meeting last week. The Presstalk caller he referenced raised concerns about address problems living in Farragut’s 37934 ZIP code — issues Caldwell said he has experienced — being recognized by other government entities as Knoxville instead of Farragut, with many residential and business addresses inside Town limits officially listed as “Knoxville, Tennessee 37934.”
Is Farragut a Town in name only?

That is the question posed by resident Jim Caldwell, who addressed Farragut Board of Mayor and Aldermen last Thursday, June 13, near the end of its regular meeting.

He brought a cut-out copy of a June 13 farragutpress Presstalk, in which an anonymous resident had related her experience with renewing her driver’s license, saying she was told the Town of Farragut was not recognized as a separate entity by U.S. Department of Homeland Security.

Caldwell said the issue was “troubling” to him.

“Does the Town have an identity as far as the federal government is concerned?” Caldwell said. “Someone went to get a new driver’s license, and the Department of Homeland Security does not legally recognize the Town.

“I live in Farragut,” he continued. “Not Knoxville or Concord. I live in the Town of Farragut.”

However, “The issue of the ZIP code does not mean we are not recognized by state or federal goverments,” a Town press release stated Tuesday afternoon, June 18.

Caldwell said he had moved to the area from Charlotte, North Carolina, and “I chose Farragut because of what it offered.

“This is something that has bothered me a great deal,” he added. “So when you get your driver’s license, they will not let you put the Town of Farragut on it, and we can’t do that again?

“Something needs to be done. I wanted to bring it to your attention. Maybe we could get a ZIP code that represents Farragut, and not Knoxville.

“The Town was organized and approved by the state of Tennessee, but it still is Knoxville? I don’t know where I live.”

Alderman Scott Meyer said it was the first he had heard of the issue.

“What would be the next steps?” Meyer asked. “If we can’t use Farragut anymore, what can we do?”

“I would suggest starting at the state level,” Town administrator David Smoak said. “It seems it may have started over the last 30 to 45 days that you are no longer allowed to (use Farragut on your license).”

While nothing was decided by BOMA on how, or if, to pursue the matter, Mayor Ron Williams said in a follow-up e-mail he plans to talk to U.S. Rep. Tim Burchett (R--2nd District) about this issue since the U.S. Department of Homeland Security is involved.

In other business, BOMA:

The only changes from the first to the second reading were the following increased expenditures: $5,000 for splash pad feature replacement; $80,000 for building codes software Smoak said would not be invoiced until the new fiscal year, reducing the current year’s estimate but increasing the new year’s estimate; and a $14,500 increase in street sweeping costs.

A revenue increase of $80,355 from building permit revenues also was included in the new budget documents.

• Approved a $536,285 agreement with Homestead Land Holdings, the developer for Brookmere Subdivision, for construction of a planned roundabout on Virtue Road at the neighborhood’s planned entrance.

The Town had entered into a cost-share agreement with Homestead Land Holdings in 2018, to construct Virtue Road improvements, and the roundabout project is an amendment to the original agreement.

Once begun, the project is to be completed within 60 days. The portion of Virtue Road between Sugarwood and Vista subdivisions would be closed to through traffic during construction.

Russ Rackley of Rackley Engineering, who is working with Homestead on this project, told the Board he expects to finish before school begins in August.

• Approved on first reading an ordinance prohibiting short-term rentals in the Town of Farragut, despite a plea from Jennifer Roach of the Knoxville Association of Realtors.