He’s ‘Jack of all trades’ at Bearden

A teacher, coach, SI-director, Jack Tate retires from full-time teaching at BHS, yet will remain a major Bulldogs contributor 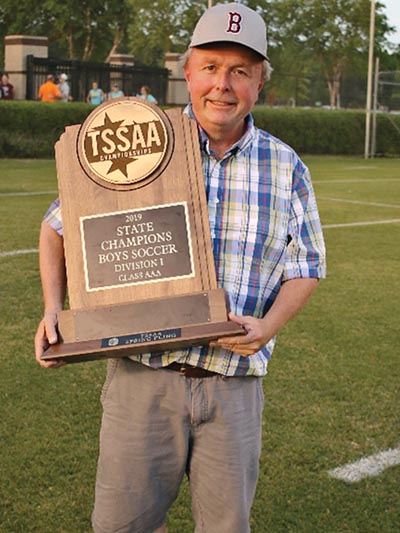 Tate, a former Bulldogs baseball head coach and assistant coach, is a true Bulldog. He was invited to join in the championship picture (right photo).

“This is the best retirement present I could ask for,” said Tate, who has officially served as BHS sports information director for the last three years.

He is no stranger to the Spring Fling. As an assistant coach to now-Farragut baseball head coach Matt Buckner, Tate went to the state tournament.

Tate, who inherited Bearden’s program when Buckner moved west down Kingston Pike, took over the Bulldogs as head coach and led the 2012 team to the Class AAA state championship game.

Bearden lost that game to Arlington after beating the Admirals to claim the Region 2-AAA championship. The Bulldogs beat Jefferson County to punch a ticket to the Midstate.

“That was a great team,” Tate recalled. “Our first four hitters in that lineup were all-state players.

Broyles was a junior college All-American at Dyersburg State Community College. Lance played at Tennessee while York starred at East Tennessee State. Thomas, who signed with the Tennessee Volunteers, was drafted by the Blue Jays. He’s now in the St. Louis Cardinals organization, where he is on the 40-man roster and has had two stints in Major League Baseball this season.

Tate obviously is proud of that team, but the school has meant much more to him — and his stay there was about more than just baseball.

“Bearden High School has always been a great place to work,” Tate said. “We have great teachers; great students and we’ve had great administrators. I’ve never had any discipline problems or anything like that. I’ve always enjoyed interacting with the students.

“When you have great administrators who support you, it makes it easy to come to work,” he added.

Tate, a 1978 BHS graduate, loves the school so much he couldn’t leave it behind.

He’ll teach two social studies classes this fall and continue to handle his duties as the school’s sports information director.

“I’ll teach in the mornings in the fall,” Tate said. “So I’ll still be around and I’ll continue in my official capacity as the sports information director. I was always on Twitter and Instagram.

Tate is a University of Tennessee graduate and his legacy in Knoxville area sports is wide-reaching.

He was a one-time bat boy for the former Knoxville Sox Minor League Baseball team (now Tennessee Smokies), and was associated with the Southern League team in 1978.

Tate got to know a future legendary manager: Tony LaRussa, who went on to win World Series championships with Oakland and St. Louis, managed the Sox to the 1978 pennant by beating the Savannah Braves.

Tate said he originally intended to be a sportswriter. But he began coaching baseball at an early age, discovering that was his calling and passion.

“I started out in journalism,” he said. “But I once I got a chance to coach, I switched to education so I could coach and teach.”

Much of his life has been spent teaching at BHS and coaching on the diamond with the Bulldogs.

“I’ve been at Bearden High most of my life,” he said.

However, Tate started his teaching career at Bearden Middle School, where he taught Tennessee history to seventh-graders from 1985 to 1996.

In 1996 he returned to Bearden High. In addition to a three-year stint as Bulldogs baseball head coach, he was an assistant under Buckner, current coach John Rice, and former head coaches Mitch Carter, Bill Pernakoff, Gene Hill and Richard Cowan.

At Bearden, he was associated with the baseball program for 35 years and was the junior varsity coach for 32 seasons.

Aside from sports, Tate is a movie buff.

Throughout his career, Tate said he has shared that passion with his students.

“In film studies, I introduce my students to all genres and every aspect of the movie industries,” he said.

“I like all genres of film and I want my students to have a good understanding of all of them.”