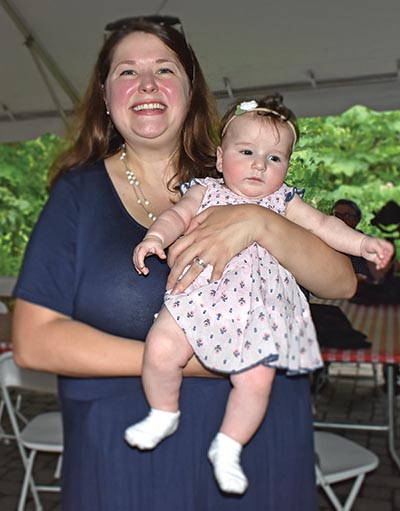 Liz Baley of Loveland, Ohio, holds Annaliese, who was the 800th baby born thanks to Farragut-based National Embryo Donation Center, which celebrated her birth and the 839 others born as of Saturday, June 8, at Ijams Nature Center.
Farragut-based National Embryo Donation Center has changed the lives of hundreds of families while also ensuring viable embryos have found life outside the science lab.

The non-profit recently commemorated its 800th birth with a celebration at Ijams Nature Center in South Knoxville, attended by many of the grateful families whose children were born thanks to their efforts.

“I love them,” said Rochester Hills, Michigan, resident Sharon Kazmierczak, who traveled to the celebration with her husband, Aaron, and their children, 7 year-old, Hope, and 5-year-old twins Ben and Nora, all of whom were born thanks to NEDC. “I did a lot of research, and knew it would be a perfect fit, and was the way God meant to grow our family.”

The couple also sees the wisdom in exposing their children to others who have been conceived and born under similar circumstances.

“They are still growing and we want to support them,” said Kazmierczk, noting the family also attended the 500th baby celebration held four years ago. “It is good for them to know there are other embryo adoption families, even though they might be few and far between.

“But the more we can show them, the better they will be able to deal with the unique circumstances as they get older.”

The couple also shared a children’s book Sharon has written about embryo adoption, “Chosen and Loved,” and provided copies to all families who attended.

During a short ceremony, U.S. Rep. Tim Burchett (R-2nd District), said, “None of us would be here, except God gave (NEDC co-founder Dr.) David Stevens a vision.”

Stevens, who also is CEO of the Christian Medical and Dental Association, founded NEDC in 2003, with the assistance of Dr. Jeffrey Keenan, current president and medical director.

“It was in the middle of the embryo stem cell debates, when so many embryos were being sacrificed in the name of science,” Stevens recalled.

“I called and talked to Jeff Keenan, and that is how we got started.”

A big part of what the NEDC does involves not only implanting embryos donated from individuals and couples who have completed their own families, but also being able to procure those embryos.

“That phone call changed my life and the lives of so many donor embryos and recipients,” Keenan said. “There is no bigger blessing than that.”

“Then this year, on Jan. 20, the 800th baby, Annaliese Baley, was born,” Keenan said as he introduced Annalisa’s parents, Liz and Sean, of Loveland, Ohio, and Annaliese’s big brother, Andrew.

Liz said Annaliese’s birth “was the fulfillment of my heart’s desire to carry my child. It was an answer to prayer and it means the world to us.”

“The NEDC was a life-saver for us,” said Leslie Warren of Alabama, who along with her husband, Chuck, welcomed their son, Wesley, eight years ago.

Since Annaliese’s birth, 43 more NEDC babies have been born — three since June 8.

Carol Sommerfelt, NEDC’s embryologist and lab director, also spoke and thanked not only the families at the celebration, but also the donors who chose to allow their embryos to be adopted.

“When I came in 2003, I did not foresee everything God had in store for us, but the program continued to grow, and now we are looking forward to our 1,000th baby not too far in the future.”

“This is all God’s work,” Keenan said. “We try to do our best to be faithful, and all the glory goes to Him.”