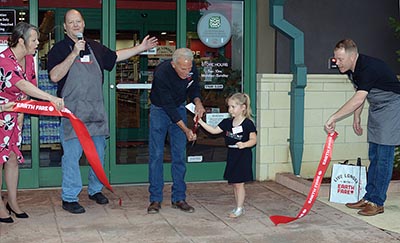 “We are very, very excited about the renovations and what it means for our Knoxville shoppers,” said Andre Nowading, assistant store manager for Earth Fare Turkey Creek. “We’ve updated as much as possible, brightened the entire store and have great new products that we look forward to introducing to the community.”

“We’ve been in the community for 15 years, serving healthy food to the community,” Tom Bahl, Earth Fare senior director of new store openings and renovations, told the crowd. “We dressed up the store for you, and I hope you enjoy all the renovations that we put in.”

A line already formed at the door by 6 a.m., to take part in the mystery gift card giveaway and see the store’s changes.

A $1,000 donation to Earth Fare’s Give Back partner, Beardsley Community Farm, also was part of the celebration.

”We also updated store fixtures and signage in keeping with Earth Fare’s current branding,” she added.

“Earth Fare’s store design and overall look and feel has evolved since the store opened 15 years ago (June 23, 2004),” Aker said. “We are grateful for the support of the community and want to reinvest in the store so that our loyal shoppers can experience the same Earth Fare brand and assortment as our customers in newer markets.”

“Earth Fare is proud to carry the largest selection of organic and non-GMO products in the industry — including fresh produce,” Aker said. “But what sets Earth Fare apart from other grocery stores is our adherence to a strict “food philosophy” that ensures that all products sold are free of high-fructose corn syrup, artificial fats, artificial colors, artificial preservatives, artificial sweeteners, bleached or bromated flour and are never administered antibiotics or growth hormones.

“The ‘food philosophy’ is supported by Earth Fare’s pioneering ‘Boot List,’ which outlines hundreds of harmful additives that have been banned from the store.