Balance budget or pay yourself

Rep. Burchett bill proposes $ penalty to all 435 in Congress 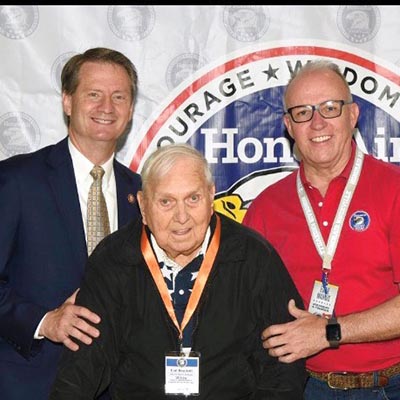 U.S. Rep. Tim Burchett (R-2nd District), left, and HonorAir Knoxville founder Eddie Mannis, right, congratulate Morning Pointe of Lenoir City resident Earl Brackett for being selected to participate in a virtual trip to Washington, D.C., courtesy of HonorAir Knoxville. Although Brackett, age 97, served with the U.S. Army in Europe during World War II, he has not been able to make the trip to Washington, D.C., to see the World War II Memorial for himself due to health concerns. “I have always wanted to visit Washington, D.C., but didn’t think I’d be able to because of my health. I am very grateful to HonorAir Knoxville for allowing me to take this once-in-a-lifetime trip without ever stepping on a plane,” Mr. Brackett said. “It was a wonderful experience.”
Freshman U.S. Rep. Tim Burchett (R-2nd District) is making good on his promise to target the Washington, D.C. “Swamp” by authoring a bill that would financially penalize both House and Senate members who refuse to pass a balanced budget.

He introduced the “Do Your Job Act, H.R. 3440” earlier this week. If voted into law it would cut the annual pay of all Congressional representatives by 10 percent if, by the first day of the fiscal year, both Houses of Congress have not agreed to a concurrent resolution on a balanced budget.

Burchett’s bill comes on the heels of a proposed $4,500 pay raise increase for U.S. House members by House Democrats earlier this month.

“There’s been a lot of discussion around pay increases for members of Congress, but why not pay cuts?” Burchett stated Tuesday, June 25, in a press release. “Nothing gets done — on either side — because of partisan games. Congress is required by law to pass a budget, yet we haven’t done so in two decades.

“It’s ridiculous. If you don’t do your job in the private sector, you don’t get paid,” he further stated. “Congress should be held to the same standard. We have to stop funding the government by continuing resolution and piecemeal omnibus bills.

“Running the government this way holds the process and the American people hostage to partisan whims. Instead we need to pass a real budget so we can

have a real debate around spending priorities and how we use (our constituents’) hard earned money.”

In a phone interview Thursday, June 20, Burchett also said balancing the budget is a non-partisan issue. “Even thought the Democrats are in charge now, the Republicans can’t take the moral high ground on this because when they were in charge, they didn’t pass a balanced budget either,” he said.

If the bill passed it would not take effect until a new Congress is elected, Burchett added, due to provisions of the 27th Amendment, which prohibits changing the compensation paid to Congressional representatives until after an election is held. It would take effect when the 117th

Although Burchett said he has not heard from other members of the House or Senate regarding the bill, he added, “I have heard all positives from business people and people on both the Left and the Right.”

He did not speculate on whether or not Congress would likely vote his bill into law, but did say, “We are not going to vote to police ourselves.”

Burchett has openly shared his frustrations with trying to navigate Washington politics, most notably on the social medial platform Twitter, where he regularly updates his constituents and followers.

He said he requested placement on the House Budget Committee, noting that “very few” House members seek membership on it.

“I didn’t come up here to make friends,” Burchett said. “Our country is spending out of control, and what we are doing will affect not only our children but our children’s children.

“We have got to bring everybody to the table, but the Democrats don’t want to since it’s an election year,” he added.

He has remarked on how fellow Budget committee members are more concerned with whether they will return to Washington, rather than matters at hand. In a June 11 Tweet, he noted, “Budget Committee hearing on climate change. No solutions offered just folks running for re-election.”

While fighting “politics as usual” as best as he can, Burchett remains undaunted.

“The truth is it is exactly what I thought it would be,” he said. “We have people who would rather be ruling in Hell than serving in Heaven.”