Lots of problems with flooding, roads, zoning in late ’70s 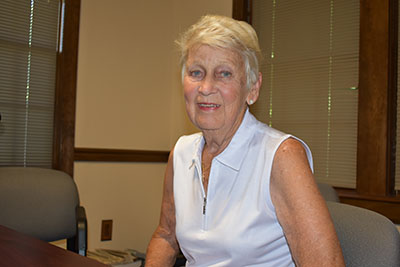 Betty Dick
Given the lion’s share of credit for being the most persistent and outspoken voice in the late 1970s favoring incorporation of the area now known as Town of Farragut, Betty Dick was then a member of Village Green subdivision’s homeowners “board.”

“It was my responsibility to keep up with what was happening out here; zoning and things like that,” said Dick, a Town alderman between 1981 and 1987 and current member of Farragut Municipal Planning Commission, while recalling the many grievances these rural southwest Knox County residents had with county government in 1978 and 1979.

Betty Dick was then a member of Village Green subdivision’s homeowners “board.” The former Town alderman between 1981 and 1987 and current member of Farragut Municipal Planning Commission, recalled many grievances these rural southwest Knox County residents had with county government in 1978 and 1979. This weeks Foundations: 40 Years of Farragut podcast is presented by Scott Meyer. Farragut Alderman Ward 1.

When heading to downtown Knoxville to Knox County Commission and Metropolitan Planning Commission seeking to air grievances, “We ran into people from Village Green that were having issues, from Fox Den that were having issues, and some people that lived in this general area that weren’t necessarily in subdivisions,” said Eric Johnson, a retired civil engineer at Y-12, X-10 and K-25 in Oak Ridge who moved to Kingsgate, his current residence, in 1974.

“… We seemed to have the same issues. Their issues were probably more severe than ours.”

The late Dr. Ralph McGill, a research engineer at ORNL who later was tabbed as “leader” of FCG before his roughly nine years as mayor of Farragut (2009-18), and wife, Marianne McGill, dealt with flooding issues at their Village Green home when moving from Detroit in 1978 — attributed to contractors acting illegally.

“It was so horrendous,” said Marianne McGill, one of the four aldermen on the first Board of Mayor and Aldermen in April 1980. She is now a resident of Sugarwood subdivision.

“That’s how we got involved in the whole situation.”

“The property north of them was a floodplain — you can’t build on it,” said Ron Simandl, yet another FCG member who is retired as a full-time chemist at Y-12 in Oak Ridge.

“Well, Knox County totally ignored that,” added Simandl, who moved from Wisconsin to Linda Heights in 1977 before moving to Sugarwood, his current residence, in 1989. “One day Ralph woke up and they brought in truckloads of dirt in, and they started filling that property, which of course is illegal. Apparently the builder got a permit to fill in that floodplain.”

Flooding of the McGill property resulted. “When it rained it became Ralph’s problem,” Simandl said. “… That really made him mad.”

As for his own problems in Linda Heights, “The entrance dipped maybe 6 to 8 feet, and every time it rained we had to drive through a lake to get out of the subdivision,” he said. “The older-model cars in the 70s, water sprayed up on the distributor and engine and (the car) would die in that puddle down there.

Johnson said he lived “on a little dead-end street off of Midhurst” in Kingsgate when he “received a notice in the mailbox that the homeowners in Kingsgate had several issues.

“And one of the issues that I was aware of … if you got up early in the morning, you better take a shower quick because our water pressure went down to nothing. So our water lines were insufficient,” he added.

Moreover, “They kept adding on the backside of Kingsgate, but they never had any other entrances onto Kingston Pike or Turkey Creek or a main road,” Johnson said. “There are two roads that go through Kingsgate, Peterson and Midhurst, and they just became so busy, and people were driving so fast,” he added. “… And we’d had some accidents on Peterson because the road was built on a hill that was so steep that you couldn’t see cars backing out of the driveway.

“And there was actually one person killed in an accident there.”

Overall in the area, “The roads were a disaster,” he said. “If you can picture Campbell Station Road being about 14 feet wide. … And it was a lot wider than Concord Road,” which Johnson described as being “patch on top of patch” versus getting sufficient resurfacing work.

“And it was so narrow, cars had to slow down where they passed each other (going in opposite directions),” he added.

Meanwhile, “Knox County was in the process of approving three truckstops at Campbell Station Road and the Interstate,” Johnson said. “And one of them was going to be right next to (Farragut) Primary School. And we didn’t think that was going to be a very good situation.”

Taking a closer look at Knox County zoning regulations in the area now Town of Farragut, “Knox County just blanket-zoned everything commercial on Kingston Pike, basically west of Willow Creek golf course,” he said. “And actually most of it they designated commercial east of there.

“If they had built all of that commercial it would have been a disaster in our area,” Johnson added. “And we compared it to Chapman Highway and Clinton Highway, what those were like.”

FCG members “started talking about (what) they heard, that Knoxville was getting ready to annex a bunch of land,” Simandl said. “… They had been rezoning carte blanche down Kingston Pike without any input from people living out here.

“I’ve seen how other cities grow and decay, and I didn’t want that to happen in this same area,” he added. “If you look at Clinton Highway, that’s helter-skelter development; if you look east of Lovell Road, I’m not pleased with the development along there.”

“We felt like this was going be another Chapman Highway if we don’t do something about it quickly,” Marianne McGill said.

(Hear the full Betty Dick interview on the Foundations Podcast at farragutpress.com)