CAK workhorse to be a UK thoroughbred? 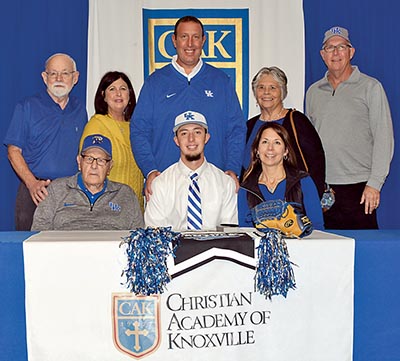 Family members were out in full force to support Tate during the school’s National Letter of Intent Signing Day in CAK’s cafeteria Nov. 14. Sitting alongside Jake and celebrating his college choice, the University of Kentucky, are Ralph Tate (his grandfather) and Enid Tate (mother). Standing, from left, are Jerry Smith (grandfather), Sally Mathews (aunt), Scott Tate (father), Kolbe Smith (grandfather) and Eric Mathews (uncle).
A workhorse superstar, as both an overpowering pitcher and dangerous power hitter, Jake Tate perhaps will be the one Warrior player most associated with Christian Academy of Knoxville’s baseball state championship “threepeat” (2017-2019).

Named “Mr. Baseball” statewide in Division II-Class A last season while earning Player of the Year in Tennessee honors from Prep Baseball Report, this talented 6-6, 229-pound southpaw is ready to tackle the next level.

It’s all about striving to be a thoroughbred, at the University of Kentucky no less, in the rugged Southeastern Conference.

“He can really command his fastball,” the coach added about Tate, staff ace his final two seasons at CAK, who finished his career with 116 strikeouts to go with a 12-0 record (76 1/3 total innings) and 0.91 earned run average as a senior. Opponents hit just .156 against him in 2019.

As for other pitches, “Oh, his change-up — he’s got a really good change-up,” Mingione said. “And obviously he’s got a good breaking ball, too.

“But his success starts with him establishing his fastball,” he added.

However, “To get to that next level I’m going to need to increase my velocity and work on my mechanics more,” he said. “And my curveball’s got to be better.”

Nevertheless, “He has great presence on the mound. The numbers, the track record, speak for themselves,” Mingione said. “And he’s played in a ton of meaningful games.”

As for Tate having an opportunity to be one of Kentucky’s primary starting pitchers in 2020, Mingione said, “One thing I do here every year at the University of Kentucky is we give basically every guy an opportunity — it doesn’t matter what you did the year before — and there’s a reasons why: we’ve had a ton of freshmen get significant playing time.

“And that’s because we believe, ‘Victory is earned every day,’” the coach added.

“So if Jake is one of those guys, he’s going to get the same opportunity that everybody else is going to get.”

“But he’s got a skill level we’re excited about.”

In addition to Tate’s talent, “One of the biggest things about him is he never gets rattled,” CAK head coach Tommy Pharr said about a player who has pitched in several “do-or-die” postseason games. “He’s about as steady as they come.

“And he has a great work ethic,” the CAK coach added.

As for why Tate chose Kentucky, “the coaching staff, they’re amazing, and the new stadium they built also was a big reason; the facilities were real nice,” he said.

“And the school itself is a good school,” added Tate, a marketing major, who already has enrolled in UK summer school while going through non-field “orientation” workouts alongside fellow Wildcat freshmen.

Already, “I’ve noticed the jump from high school to college, like with strength and conditioning, is a huge jump,” he said.

But with Pharr’s sophisticated approach to high school baseball development at CAK (nine career state championships as a head coach), “It makes the transition easier because I kind of knew what I was getting into,” Tate said.