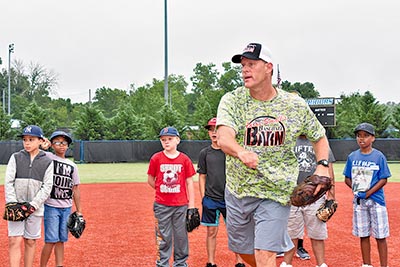 Former MLB pitcher Aaron Small demonstrates the way to fire plateward to Wesley House Baseball campers.
KNOXVILLE — For the second year in a row, Christian Cate’s love for children and baseball — all stemming from a heart for the Lord — produced a summer camp for inner-city youngsters who otherwise haven’t had much experience with “America’s pastime.”

The recent Christian Academy of Knoxville graduate held his Wesley House Baseball Camp near the Wesley House facility in the summer of 2018, having developed it initially as a Capstone Senior Project, required of all CAK seniors.

“I loved doing it, and everyone had so much fun,” Cate said. “The kids seemed to really benefit, not just from learning the game but they just seemed to eat up all the one-on-one attention.

“We couldn’t help but love the kids,” he added. “It became personal. I felt that it was needed, so I got with my friends who helped (last year) and added some more friends to the team this year.”

Cate said the camp averaged about 20 kids each day, about half of which were “returning campers” from last year. He was assisted by 10 adults and 12 youth volunteers.

One unexpected occurrence was partial flooding at the ballfield they would use just prior to the camp’s start — Monday through Friday, June 17-21.

But Cate reached out to Ried Estus, CAK athletic director, who “readily agreed” to allow camp to take place at the school’s softball field for two days, Cate said.

“It really was exciting for the kids to go somewhere out of their usual neighborhood, and to get to play on a high school field,” he added.

Cate also was able to enlist the help of former Major League pitcher Aaron Small, who shared his Christian testimony on the field Wednesday, June 19, at CAK.

Small, who lives in Loudon County, started coaching area youth after retiring from an 18-year career, which included four in the Major Leagues pitching for the New York Yankees, the Oakland A’s, the Arizona Diamondbacks and the Atlanta Braves.

“Just knowing Christian and his family, and knowing the kind of character he has and his heart for these kids, I just wanted to be there to help him,” Small said.

Addressing the campers, “God had a plan, and God has a plan for all of you,” he said, praying with the group before turning to baseball. Pitching and warming up with Cate, Small then advised the campers about proper technique.

“They absolutely love the camp and said it was the high point of their summer,” said Kara Finger, executive director of Wesley House, who praised Cate’s “character and passion for baseball and the kids for their experiences.”

Cate, who will attend Lee University in Cleveland, said the camp “started as a school project, but it became so much more.

“He used this to heal me, I guess you could say.”

“In the end, maybe I got as much as the kids did, if not more. It’s cool how God works like that. Kids of all ages need someone to tell them their value to God, and I can be a little part of that for these kids, then how could I say no to that?”