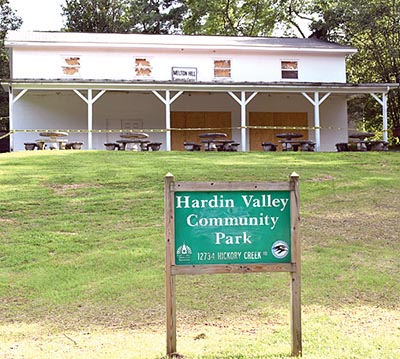 Hardin Valley Community Center was hit hard by vandals sometime during the June 21-23 weekend. Further investigation determined the building is in overall disrepair, and would cost “in the six figures” to repair, according to Knox County officials.
Area residents, once hopeful they could repair and restore Hardin Valley Community Center after it was hit by vandals recently, have instead learned the building has been condemned by Knox County officials.

The building, located along Hickory Creek Road and currently owned by Knox County Parks & Recreation Department, had been ransacked, windows were broken, and profanity had been spray painted inside the roughly 50-year-old building sometime over the weekend of June 21-23. A police report was filed with Knox County Sheriff’s Office, then the Knox County offices of Codes and Risk Management investigated further in the days following the vandalism, said Mike Donila, deputy director of Knox County Parks & Recreation.

“The building itself was just a mess,” Donila said. “It looked like whoever it was threw pieces of tree limbs through the windows.”

Three plate glass windows were among those shattered, and those alone would cost $1,500 each to repair, he added.

Beyond the immediate vandalism damage, the building itself was found to be in poor condition.

“There was black mold found in the basement, and the roof was coming down,” Donila said. “Since more than 50 percent of it is damaged, we would have to bring it up to current code requirements and ADA compliance, too.

“It would cost more than the building is worth to fix,” he added.

“Members of the community had built the structure in the 1960s,” said area resident Herschell Brooks, who not only still lives nearby but helped with the construction as a teen. He said his second cousin had donated the land on which it was built. It originally was named Melton Hill Community Center and was later donated to Knox County.

Brooks had known of an initial plan to help clean up the damaged center after the vandalism had taken place, and showed up for the meeting Tuesday, June 25, not knowing it had been postponed.

While there, he talked about how area Boy and Girl Scouts met at the center down through the years, as did softball and community leagues, Ruritan and 4-H Clubs, and shared that his parents celebrated their 50th wedding anniversary there.

Donila could not pinpoint the time frame when Knox County received ownership of the building and the football field behind it, but said the area community group “really had been (overseeing) that building” in recent years.

“I’m not saying it is on them at all, what has happened there with the deterioration,” he added. “I just think it happened gradually, and they didn’t realize. I don’t think anybody must have been going down into the basement. At first, we weren’t even sure the lights worked.”

Brooks acknowledged the building “had been getting in bad shape” in recent years.

Donila stopped short of saying the building would be eventually torn down.

“I would hesitate to say that, but it doesn’t look good,” he said. “We may all of a sudden decide to invest the money, but it would be well over six figures to bring it up to code.”

He said the county might instead elect at some point to put up some kind of a shed.

“It is something we will certainly be talking about in the future,” Donila said.

In the meantime, he said the County would be allowing those who had equipment stored at the Center to retrieve it.