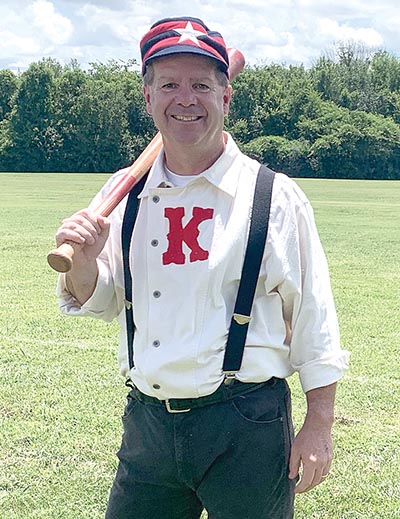 Saying he was “open to getting back into something,” Purcell, a former slowpitch softball player, is a rookie with the Knoxville Holstons of the Vintage Base Ball League. It’s one of two Vintage teams in the Knoxville area and one of a handful statewide that play by the baseball rules of 1864 — and with replica equipment, uniforms and field locations. “… The way it was described it was something I wanted to do,” he said.

Having played softball both in East Tennessee and Chicago, Purcell said the on-field atmosphere of Vintage Base Ball “is a lot more laid-back than what I expected. I sort of expected more of an intense competition.

“Although I can see that some of the teams have that feel, they want to win more than some of the guys in the league,” he added. “When I played softball the goal was to win. Here it seems to be you want to have a good time, and then win.”

However, “It’s harder that you would expect,” he said.

In addition to fielding a hardball slightly smaller than a modern baseball without a glove, Vintage hitters must swing a bat that is heavier with a larger handle and a “four-inch” knob versus conventional baseball and softball bats.

Moreover, “To get a hit it’s not as easy as it looks,” Purcell added.

Similar to softball according to Purcell, “I can hit the ball where I want.

“But because of the bound rule” a ball seemingly hit into certain open fair territory areas, as defined by modern baseball and softball, is a foul ball in Vintage Base Ball.

“And a well-struck ball hit right at somebody, and they can catch it on (one) bounce,” is an out — also unlike modern baseball and softball, he added.

“It’s a lot harder to get hits than I expected.”

About his performance as a rookie, “I’m doing OK,” he said.

When he was considering an offer to play from the friend who eventually talked him into it, Purcell asked if he might know any of the Holston players. The friend responded, “‘You won’t believe this but I don’t know any of their real names,’” Lumberjack said. “It’s true. I know my teammates by their nicknames.

“After the first practice, I found out two of them worked with me at S & S at Oak Ridge National Lab,” he added. “… Another one plays for the Emmett Machinists,” the other Knoxville area team.

For all of the differences versus the modern diamond games, and despite suffering a minor knee injury early in the season, “It’s really fun to play again. It’s fun to be out there laughing and having a good time running and exercising and being in the sun,” Purcell said.

“They’ve welcomed me — and it’s great that I’m getting to be a part of it.”

“My son played baseball in high school, and one of his (teammate’s) dad’s was playing (Vintage Base Ball),” Purcell added about Sean’s years playing on the Knoxville Catholic High School baseball team.