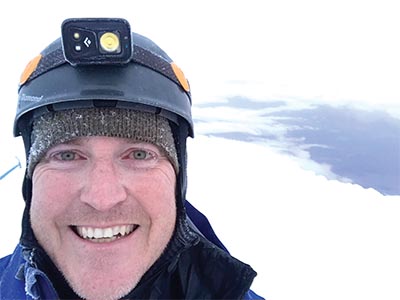 “If you ever have a dream, go ahead and do it,” he advised fellow Rotarians during their meeting in Fox Den Country Club Wednesday, July 10, when he shared his experiences of climbing Mount Hood, the highest peak in Oregon.

“It was just amazing,” he recalled. “It was an amazing view and just a fun day. It was a great sense of accomplishment to reach the summit.”

“You want to get up there before the sun comes out and starts melting the snow because as the snow melts during the day, it makes the ice softer and (it) could cause avalanches or it could cause you to just slip and fall easier,” Smoak said. “You want that snow to be as hard-packed as possible.”

Along with the already cold temperatures, a storm front moved in as they were preparing to descend.

Smoak said 10,000 people have attempted the climb, and there have been 130 accident-related deaths on Mount Hood. He noted the deaths were attributed to hypothermia and falls. The second deadliest alpine disaster in North American history occurred in May 1986 on Mount Hood, when seven students and two faculty members died after the group descended off course during a storm.

“You may wonder what I was thinking, trying climb a mountain, what inspired me?” Smoak said.

“Back in March my wife and I — for our anniversary, went to the Grand Canyon,” he added.

“We hiked down and back up in one day.”

He started his training in Great Smoky Mountains National Park, climbing 3,000 to 4,000 feet.

Smoak continued his training on Mount Arkansas, a 13,800-foot peak in Colorado.

“I didn’t know what exactly to expect, but I felt prepared enough and confident enough that I would be OK,” he said.