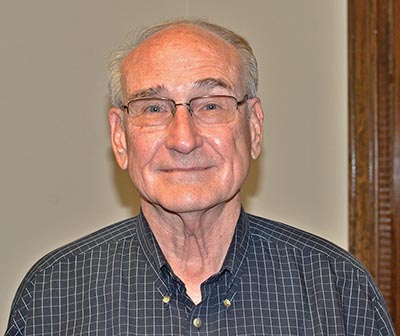 Ron Simandl
Opponents of Farragut Community Group’s effort to incorporate in fall 1979 formed a passionate, though unsuccessful, roadblock — with at least one trying to intimidate FCG members with threats.

But a powerful, and legal, threat came from then Knoxville Mayor Randy Tyree: annexation.

“The World’s Fair was coming and Knoxville was looking to annex more property,” said Eric Johnson, a retired civil engineer at Oak Ridge National Laboratory and FCG member. “They had a big bill coming for the World’s Fair and they needed a larger tax base.”

For that reason, FCG members feared Tyree would act quickly to annex areas of what is now Farragut if he knew the Town was planning to incorporate.

Therefore, “A good time to file our petitions was when he went off on vacation,” Johnson said about a period in late October of 1979. “So we filed the paperwork and proceeded to work on incorporating the town.”

Having moved from Wisconsin to what is now Farragut in 1977, Ron Simandl is a chemist at Y-12 in Oak Ridge who semi-retiring five years ago — still working once a week. Simandl’s involvement as a member of Farragut Community Group, aided by his friendship with fellow FCG member Eric Johnson, was fueled by flooding issues generally ignored by Knox County government in Linda Heights subdivision, his original Knox County home. This weeks Foundations: 40 Years of Farragut podcast is presented by Concord Christian School and Preschool

Lawsuits attempting to stop, and then reverse, incorporation featured Roach versus Rodgers.

“John Roach was the law director for Knoxville, and Dave Rodgers represented us,” Johnson said. “Dave won every case.

“Once we filed (for incorporation), Knoxville became very interested, so they (attempted to) annex us, and there were a bunch of court battles,” he added. “… I’ll never forget, we all went to court. Dave was there arguing and John Roach was arguing.”

Recalling the judge’s ruling, “After their presentations, (the judge) says, ‘court’s over, go home,’” Johnson said “… We walk out of the courtroom,

and we said, ‘Dave, what

happened?’ And Dave’s all excited — and Dave didn’t get excited very often — and he said, ‘We won. … What the judge basically said is, ‘Knoxville you can’t do anything.’”

Moreover, “We were sued by a number of the property owners after we were incorporated, and Dave took care of it,” FCG member Ron Simandl said. “He knew the law well enough and said, ‘don’t lose any sleep over this. … We’ll be one step ahead of this.’

“But we did because we were being sued for several millions of dollars,” Simandl added.

When approaching the Election Commission, “They kept changing the date, and changing how much it would cost,” FCG member Betty Dick said. “They had other sources they were more interested in making happy. One of them was a person in the Farragut area.”

“There was a group of developers and agents that came to my house; they tried to convince me not help in trying to incorporate,” FCG member Gene McNalley said. “They made statements like, ‘If you incorporate you’ll be lucky to get 25 cents on the dollar for what you paid for this house.’

“I didn’t believe them.”

“Ralph (McGill) was trailed home one time, my children were followed home on the school bus one time,” Johnson said.

“We got a lot of really bad telephone calls and saying nasty things to our children,” McGill said.

“The phone calls, some were in the middle of the night,” she added. “This one gentleman … would be drunk, screaming and hollering.

“It was really a battle, and we never expected that.”

Looking out for the McGills, “Gene McNalley didn’t tell us this until way later, but he had an (FBI agent) sitting out in front of our house, and we never knew that,” Marianne said.

Things were so hostile, McNalley “was packing a gun,” she said. “I think his presence

was well known there, and I think it kind of stopped a lot of (harassment).”

“It scared us, so we had to stop (and ask), ‘is this what we want to do?’” McGill added. “But it had gone so far by then, and we were being successful in what we were doing.”

“We got some resistance from people who were here forever and owned large tracts of land,” Simandl said. “It was those folks against the subdivision folks, basically.”

Simandl said he “settled” his own personal issues with

threats without going into detail, although the semi-retired chemist added the threats “kept me up at night.”

But the threats didn’t weaken his resolve because “I’m stubborn,” Simandl said with a laugh.

While Simandl was from Wisconsin (here since 1977), FGC members said they all were branded as “northerners.”

“The big landowners out here thought we were these people coming in from ‘up north’ trying to take over,” McGill said. “They accused us of being from up north, and Ralph said, ‘I hate to tell you but I’m from North Carolina. And I say, ‘I’m from Texas.”

“On the other side, a lot of the rural folks, who owned just smaller pieces of property, were against it because we were the newcomers who moved into the area,” she added.

The late Buddy White, well-known Knox County contractor, was among the more outspoken anti-incorporation forces. “He spent a lot of money trying to disband incorporation,” McNalley said. “One of his friends told me he spent a quarter of a million dollars on that program.”

In reference to an effort in the early 1970s to incorporate, “The first time it was brought up for a vote we were for it,” said Anne McFee Shipley, 91, part of the prominent McFee family in Farragut. “I was for it because my daddy (Fred McFee) was for it.

“The second time we weren’t for it,” she added. “We had meetings.

“It had something to do with (us) being afraid that a city would (levy) taxes on property. … That’s what everybody was afraid of,” she added.