Gruhn looking to soar at AFA 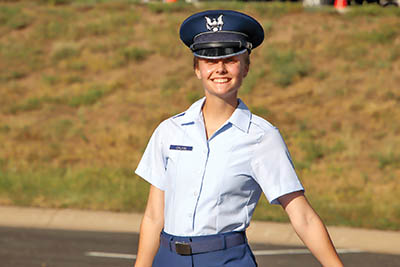 Joely Gruhn in her Service Blues
Looking to soar far beyond the long fly balls she tracked down as an outfielder with Farragut High School softball, Joely Gruhn recently reported for duty as a freshman cadet with the U.S. Air Force Academy in Colorado Springs, Colorado.

The FHS Class of 2019 graduate received an appointment to the prestigious military academy late last year, but as the child and grandchild of military veterans she said she had been planning for the challenge the last three years.

“I didn’t really know about the Academy until my grandfather told me about it,” Gruhn said. “Then I watched literally every video they put out.”

Already entrenched athletically with softball, and just as dedicated academically, Gruhn realized the goal was attainable.

“I just really fell in love with everything about it,” she said about the Academy.

A 2017 visit to the Academy clinched the deal in Gruhn’s mind. But her parents, Dave and Kelly Gruhn, weren’t quickly convinced.

“My dad was an Air Force pilot, and Dave (currently discipleship/teaching pastor at Two Rivers Church) was a Marine Corps pilot,” Kelly said. “I loved being in (a) military (family), but as the mother of two girls it never occurred to me that I would have a daughter who would want to pursue that, too.”

“I was pretty against it initially,” Dave said. “But after going out there to visit, I changed my mind. When I saw the Academy and saw her dedication to doing whatever she had to do to get in, I went from thinking it was not a good idea to seeing it as an environment where she could thrive.”

“I just prayed that God would close the door if that was not where she should be,” said Kelly, who teaches math at FHS.

“I knew my life would be easier if it turned out this wasn’t what I wanted,” Gruhn herself recalled. “But while I was there, and they were doing the military wake up, and everything else, I thought, ‘Dang it, I love this.’”

She started the rigorous application process soon after.

“They are looking for leaders,” said Gruhn, whose high school contributions and accomplishments more than met that criteria. She was president of the National Honor Society, attended Girls State and was involved with Student Government Association and Teen Board.

After completing the application to the Academy, she still needed a political appointment to complete the process.

Gruhn was interviewed by representatives in the offices of Tennessee U.S. Senators Lamar Alexander and Bob Corker,

“Congressman Duncan called me at school, last October, to let me know I got into the Academy,” she said.

Gruhn plans to be a pilot — just like her father and grandfather — which means many years of Air Force service ahead.

The family, which includes younger daughter, Clare, who will be a junior this fall at FHS, has mainly heard from Gruhn through letters since the training started — and has spoken to her only once.

“She is loving it,” her mother said. “The place, her (drill instructors), her squadron, flight and roommates. She said, ‘Mom, don’t worry about me! I am right where I’m supposed to be.