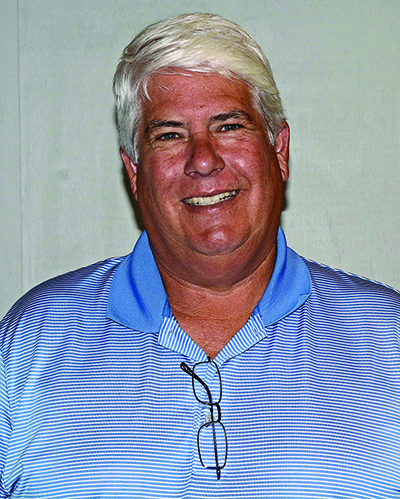 Bud McKelvey
Appalled at the thought of working a mundane, repetitive-task “9 to 5” job, Bud McKelvey said he thrives on the unpredictability of his responsibilities as Town of Farragut’s Public Works director.

“Every single day of this job is a different day,” said McKelvey, whose crew is on call 24/7 for clean-up efforts following storm and snow damage — especially when roads are hazardous or power lines are down — among tasks done with an emphasis on maintaining high Town standards of appearance.

“There have been times where we’ve done eight or 10 new things that we never even thought about doing,” he added.

As Town of Farragut’s longest-serving employee at 32 years and counting, Public Works director Bud McKelvey recalled his employment “at a mineral exploration company called U.S. Borax from 1980 to 1986. However, they closed the Eastern exploration office, leaving him out of work. Though falling back on construction work, “Which I had done all of my life,” McKelvey responded when “the Town was looking for a Codes Enforcement officer in 1987. “I applied and got it June 1 of 1987,” he added. “… There was no Public Works (department) when I was hired. “… I knew a lot about codes because I had been in the building industry since I was a teenager.” In 1993, Jack Hamlett, then Town administrator, “Came to me and said, “You’ve got a decision to make: you can continue in the Codes department, or if you want to, I’m going to offer you the Public Works position,” McKelvey said about how he became director. This weeks Foundations: 40 Years of Farragut podcast is presented by .

While his familiarity with the Town’s roads and general landscape is perhaps unmatched, landscaping is a special point of pride for McKelvey, the longest serving Town of Farragut employee who began as a codes inspection officer 32 years ago. He has been Public Works director for 26 years.

McKelvey said he was especially proud of how Public Works led the way in suggesting, then preparing the planting of long rows of flowers, shrubs and small trees —receiving rave reviews — as they run along the sloping fields on either side of the Interstate 40-75 interchange/Farragut Campbell Station Exit 373.

Taking the matter to Town administrator David Smoak about four years ago, “’Get it designed and drawn up and we’ll take it to TDOT,’” McKelvey recalled Smoak saying. “We did.

“And from the time we walked in the door, TDOT was all about it,” he added about the state agency’s eagerness to allow the decorative landscaping. “We made all the beds, and then we did a landscaping plan.

“We put in 16,000 tulip bulbs the first year, working with Keep Knoxville Beautiful. Everything is just growing really well.”

Along with its Christmas lighting and decoration work at Founders Park at Campbell Park, “That’s two of the most complimented areas where we still continue to get positive feedback,” he said.

“The (creation) of the actual Public Works department, Harold Law and I worked on that,” McKelvey said about he and the Town’s first Codes Enforcement officer. “… We oversaw Public Works when it started.

“We went over to Kmart when it was still here, bought some shovels, brooms, rakes, a Skil saw, basic hand tools,” he added.

By comparison in 2019, the Town’s total fleet of trucks, implements and various tractors total “about 33,” he said.

As for an operations center, “We had the back side of the dairy barn there at the Russell House, that’s where our office was,” McKelvey said. “We had that back garage, and that’s where we kept all of our stuff.

“It’s just taken off from there to what it is now,” he added. “… But it was a long, long process because the (yearly) budgets were so tight — where we couldn’t afford to do it all at once.”

By the time outside contractors weren’t needed for basic Town tasks, “I’d say it was the mid-90s — and maybe even a little later than that,” McKelvey said.

As for his most challenging times, “Big snowfalls,” he said. “Also, rain storms, hail storms, flooding.”

As for dealing with the memorable “Blizzard of March 1993,” McKelvey said, “I was at a wedding in Houston. … But I kept up with what was going on. … There were some guys that worked for 36 straight hours.

“They were tired, they were worn out. They had gotten one of the dump trucks in some power lines that had come down on Virtue Road,” he added.

In dealing with a unique weather situation or special emergency, “You always learn something,” he said.

Beyond weather, however, was Public Works department’s role in responding to the infamous train derailment near Anchor Park and Turkey Creek Road in September 2001.

“Our involvement with the train wreck was the perimeter of the area, where they had to get people out of,” he said. “So we had to set roadblocks up in various different places in the Town. … We manned it 24 hours a day.”

However, for all the adversity, “For the guys it was a buffet — I’ve never seen so much food in all my life,” McKelvey said about an outpouring of community and business donations to all emergency personnel.

About Scott Brewer, one of the longest-serving Town employees (since 1990), “Scott ran the right-of-way crew for me for 17 years as a working foreman.

“(The late) Gary Goudreau was one of the first employees we hired,” he added. “(The late) Pete Hammontree was the foreman for our parks and building and maintenance departments. He was there 17, 18 years” before dying of cancer.

At the top, “I’m thinking that Dewayne Belcher is one of our longest-term employees … 23 years,” McKelvey said. “He’s an equipment operator.”