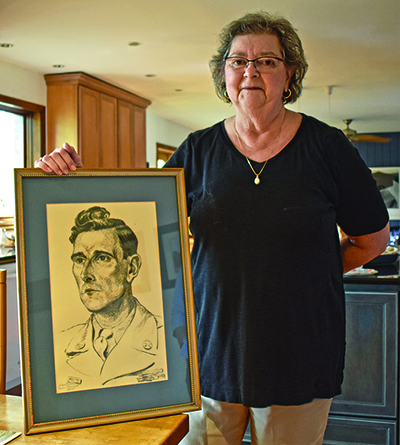 Sugarwood resident Elaine Proctor with a portrait of her late father, George Kiess, who worked as a cook both stateside and overseas during World War II.
Elaine Proctor thinks often of her late father, George Kiess, who served in the U.S. Army during World War II — but never more so as when she is writing notes of encouragement and praise to fellow veterans, which she has done for every Honor Air Knoxville flight since the program began in 2007.

This week’s flight — the program’s 29th — was no different. When more than 125 veterans concluded their day trip to Washington, D.C., on Wednesday, Oct. 2, they were welcomed home to great fanfare by family members, area residents and the star-shaped balloons and accompanying cards Proctor, her friends and her husband, Alan Proctor, had fashioned just for them.

Proctor said the idea came to her as she read up on efforts to start the Honor Air program locally, after founder Eddie Mannis participated in a similar program in North Carolina.

“I saw an article about it, and something just hit me,” she recalled. “I thought ‘what a wonderful idea it was.’”

It also made her think of her father, who passed away in 2002.

“My dad would have been first in line,” she said.

That realization made her want to contribute something herself, in honor of Kiess, who worked as a cook both stateside and in Europe during the war.

“First I had to find out if Dollar Tree would blow up 150 balloons,” she said.

The company was more than able to accommodate, and now, roughly 4,000 balloons later, “I need to give a shout out to Dollar Tree in Turkey Creek – they have worked with me since Day One on this,” Proctor said.

She also added American Flag notecards, with handwritten messages, that are tied to the balloons before they are handed out to the veterans as they leave McGhee Tyson Airport.

Volunteers help dispense the balloons, but Proctor herself is typically there, too, among the welcoming throng.

“I’ve been there for every return except five, which were due to illness,” she said.

Proctor said the long-standing effort wouldn’t be possible without the unwavering support of her husband and many friends who help the effort along the way.

She has relied on several current and former Sugarwood neighbors to help write the note cards, including T.C. Williams and Gail Hulme. They meet at Proctor’s home once or twice a year in the weeks ahead of the upcoming flights to write the cards and help seal the envelopes.

“I lost my dad (who also served in World War II) in 1984, so this is special for me, too, to be able to stop and think about what he did,” said Hulme om Thursday, Sept. 19, as she and Williams joined Proctor in her dining room to work on notes for the upcoming flight.

After the cards are completed, Proctor and her husband get the balloons, have them inflated and affix the notecards to each, using washers and weights to secure five balloon groupings.

“I have to give a plug for my husband,” she said. “He has been very supportive from the beginning. He makes sure I have everything I need.

“He also helps with the balloon pickup — which is about four car loads — and helps me tie them all together,” Proctor added.

She said they have the procedure down to a science, and vans from Mannis’ company, Prestige Cleaners, picks up the balloons and takes them to the airport.

Joe Sutter, Honor Air Knoxville Flight commander who has also been with the program since its first flight in October 2007, praised Proctor and her efforts.

“She has been really dedicated in her support to Honor Air,” he said. “The balloons are always a big hit and is something that really touches the veterans.

“I certainly consider her an integral part of the Honor Air Team.”