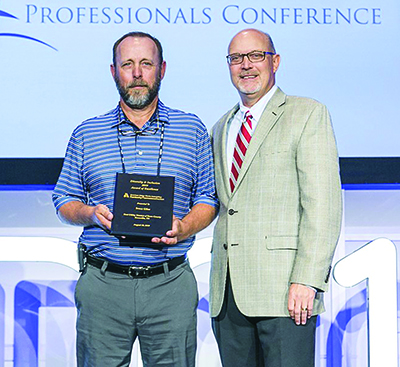 Giles earned the Diversity Award for the state of Tennessee, and was further honored Monday, Sept. 23, by Knox County Commission with a resolution praising him for the award and his service.

“Most people nominate an organization for this award but we felt like Bruce specifically deserved to be nominated as an individual since he does such a great job setting the culture in our organization,” said Chloe Pool, communications manager for FUD.

According to both the resolution and the award nomination, Giles, who has been GM since November 2010, “has worked tirelessly to implement a diversity program at First Utility District to make it an organization where any individual willing to contribute to the team mentality can thrive, grow and be provided opportunity.”

Specifically, Giles was singled out because “he puts others first, and is constantly looking for areas where we can improve.”

Among his initiatives was hiring attorney Betsy Beck to conduct a semi-annual workplace diversity training, using an assessment tool that evaluated employees’ strengths to determine the best internal management structure, and establishing an open door policy that welcomed external collaboration and contributions.

Under his direction, the Utility’s workforce has become increasingly diverse, while employees have been provided mentoring opportunities, internal and external support networks and been strongly encouraged to engage in the community.

“While every aspect of a diversity program is so important, we specifically nominated Bruce because of who he is,” the application stated.

“The overarching reality is that, while we have implemented crucial programmatic elements to our initiative, we all feel Bruce himself models and leads us in the value of diversity in the way he manages and lives his life, far more than a policy or program could. ... He gives our employees time, resources and encouragement to continue to pursue that — and the application shows Bruce has done so much more than people will ever know to lead by example.”