Chess tournament at FHS draws students from around the region 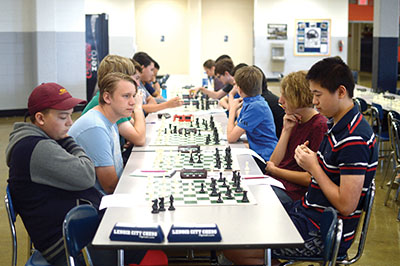 Among the 82 participants in a regional chess tournament, which was sponsored by Farragut High School and took place in FHS Commons Saturday, Sept. 21, high school-aged competitors included from left, Jadian Taylor and Justin Blanchard, paired off and competing against those on the right, from front down, Justin Lee and Jakson Kirk.
Eighty-two kindergarten through 12th-grade ranked and unranked chess players from around the region turned out to play in Farragut High School Mu Alpha Theta Math Club’s fundraiser chess tournament in FHS Commons Saturday, Sept. 21.

FHS senior and MAO president Forest Chen and other members held the tournament to raise money to offset costs for students’ registration in and traveling to math competitions through the year, said Chen, a 2318-ranked national master.

“The Nationals is one of our top events,” Chen said. “We go to it every year. It’s pretty much the main goal. This year, it’s in Myrtle Beach, South Carolina.”

These competitions increase interest in mathematics in high school students, he added.

“Without them, we cannot do anything,” said Chen, who has been playing chess since the second grade.

However, Gulledge, lead sponsoring teacher, credited Chen and his father, Jiangang Chen, for coming up with and organizing the event. When the club sought a way to raise money, Gulledge said, “Forest just reached out to us and he and his dad have really headed this whole thing. He asked (the FHS math teachers) if we could be here as sponsors to help out.

“We gladly agreed,” he added. “All the proceeds go to our math club, which is fantastic. We’re so happy to host it here.

“This particular (chess) group, Regs4chess, meets at different places around the area. Forest reached out and he and his dad started this particular tournament that was hosted (Saturday). We’re so proud of Forest for taking charge.”

The tournament offered play for novice unrated players as well as rated competitors who are members of U.S. Chess Federation.

For other upcoming tournaments, young chess players can visit and register at www.Reg4chess.com