A toast to Knoxville Room Service! 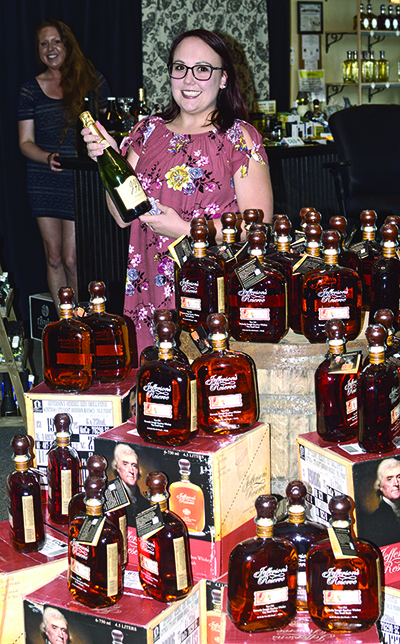 “And, we are going to have a discount on CDB and other products in the store,” Prescher added.

“And … just music, laughter and made-from-scratch cannoli, which is something that we cater with advance notice,” Krotz said.

Along with liquor, wine and beer, which is delivered, the store also provides catering, of which the desert specialties are the cannoli and chocolate-covered strawberries, as well as charcuterie boards of sausages, cheese and fruit, which, Krotz said, “can have endless possibilities.

“Amazing,” Krotz, who opened the store Oct. 19, 2018, added about her first year in business. “I feel very grateful, supported and basically in awe and disbelief.”

She also feels she created a fairyland.

“You are surrounded by everything that’s good – chocolate, wine and lots of sparkly colors,” Krotz said.

“It’s definitely different from when the establishment first opened because of what all was added,” Prescher said.

In the past year, Krotz has added a walk-in humidor and Hexagon beers, a local product, on draft for growler service.

“You can get a disposable growler delivered to you or you can bring in your own growler jug and fill it here in the store,” she said. “Or, you can purchase one of our glass growler jugs.

Also, the store now has a third cooler for beers, and she bought a barrel of Jefferson’s Reserve (bourbon), which Krotz said, for her, is a status symbol.

“I don’t know if there’s been a liquor store that’s bought a barrel in its first year,” she added. “It’s like, yeah, already in the barrel program.”

The additions came about through a Small Business Association loan Krotz received in April.

Her business clientele has grown as well.

“We have a bunch of partnerships, now, with other businesses,” Krotz said. “Our sales go up every month,” she said. “We’ve finally got a good, solid team (of employees).”

Krotz also added cocktail tables in the shop for in-store events, such as tastings, mixology classes and charcuterie catering, and they offer catering for outside events.

“All that (business) has really picked up,” she said. “And, of course, we have a lot more variety of products.

“Throughout the year, I’ve tasted many things that are new to the market … that (people) don’t really know about. I’ve tried to order these types of things.

“I’m glad I’ve grown (the business) as it’s gone, instead of picking out everything in the beginning, because I’ve been able to listen to what my customers have been wanting and then get it for them,” Krotz said. “That’s worked out really well.

“Deliveries have picked up like crazy,” she added. “The people love our service.”