Locks gone to the ‘cause’

‘Shave’ of support for FHS’s Howe, Fuller after $3,000 to fight breast cancer pledged 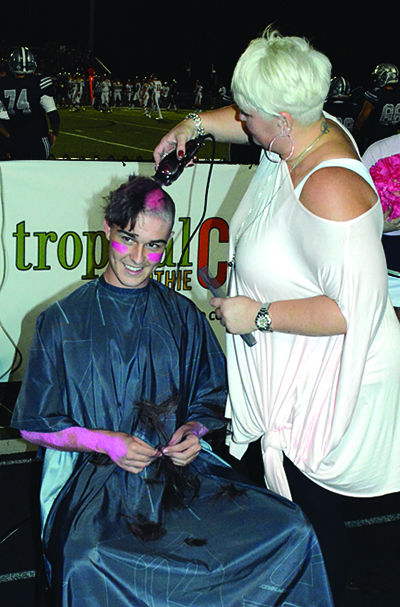 dam Fuller, and fellow Farragut High School senior Garrett Howe flash smiles as they get their heads shaved by Studio 135 professionals during the third quarter of the Science Hill-FHS Football Homecoming game. These section leaders promised to have their heads shaved if they reached the $3,000 fund-raising mark to benefit American Cancer Society’s Making Strides Against Breast Cancer Prayer Warriors team.
Two Farragut High School seniors put their locks on the line and paid the price last Friday, Oct. 4 —all for a great cause.

Garrett Howe and Adam Fuller had their heads shaved during the third quarter of the FHS versus Johnson City Science Hill Football Homecoming game, after exceeding a $3,000 fundraising goal they had set just days before to benefit the American Cancer Society’s Making Strides Against Breast Cancer FHS Prayer Warriors team.

The close friends and senior section leaders for all sporting events had jokingly been talking about shaving their heads because both were in need of haircuts.

“But I didn’t want to do it for nothing, and we started talking about October being Breast Cancer Awareness Month and how we could probably raise a good amount of money for that,” Howe explained.

The cause was top of mind throughout the community, as the annual “Pink Out” Breast Cancer Awareness campaign — led by Stephanie Slagle Thompson and the Slagle family — had been leading up to Friday and also the game.

Thompson, whose sister, Ashley Slagle, succumbed to the disease, sold T-shirts in advance of last week’s FHS girls volleyball and FHS football “Pink Out” games, and helps lead the FHS Prayer Warriors Team that walks in Ashley’s memory, which this year is Sunday, Oct. 13.

Thompson said she was overwhelmed by the gesture.

“I was just super-impressed that two high school students would offer to do that,” she said. “They told me their goal and were very confident they would make it.”

After contacting Thompson, they set up the “Haircuts for Cancer” fundraiser Monday, Sept. 30, via Go Fund Me, with initial plans to raise $1,500 in two set increments, and each shaving their heads separately.

However, through word of mouth and social media, money started pouring in very quickly, and Howe and Fuller knew they would be very close to making their goal by late Wednesday.

“I thought we would get a lot of money, then it would die out,” Fuller said. “But it didn’t.”

They made the decision to shave their heads by Thursday, Oct. 3, but still made some last-minute pushes for donations.

Howe made one final plea on Facebook Oct. 3, asking for help in reaching the goal.

“I don’t know about anyone else, but I know that for me, my mother is the most important woman in my life. She always has been and she always will be. For many teenagers, a mother is the only thing that stays constant amongst all the changes of high school growing up,” he said.

“Over a year ago, one of my best friend’s mother was diagnosed with breast cancer. She is still battling today. So, this fundraiser is for the fighters in our community like her and for the women, moms, aunts, and grandmas that mean so much to us,” Howe added.

“Everyone is affected by breast cancer, one way or another,” Fuller said.

By the time the game rolled around, the pair had raised $3,210, according to their Gofundme page. They had thought about continuing to raise funds throughout the month, but Thompson had a connection who pledged an additional $100 for every $500 in the students’ fund, if they closed it Oct. 4, and they agreed.

Thompson also was thrilled, as between the student’s fundraising and donations from Farragut Middle and Intermediate schools, as well as T-shirt sales, “We are well more than $12,000 as a team,” she said late last Friday.

“I’m just so proud of these boys,” Howe’s mother, Kim Warnick, posted on Facebook. “And thank you to all who donated.”